DuPage Co. (ECWd) –
It would appear there is no end in sight for Trustee McGuire’s need to grandstand, spread misinformation, and tell out right lies.  One can only wonder how much attention is enough for her.
Trustee McGuire has once again, with assistance from Kory (Kory Atkinson based on meta data in the file), taken things to a new low by not only sending a letter filled with lies and insinuations, but also demands for the law firm representing COD  to resign their services.  She also felt it should be provided to the Daily Herald, who kindly obliged in printing much of her misinformation once again.   (Daily Herald article)
For starters, one must wonder why the paper used what appears to be a 20 year old stock photo instead of the current one?  Was that at her request in an effort to promote her past image for political gain?  See how that works Ms. McGuire? 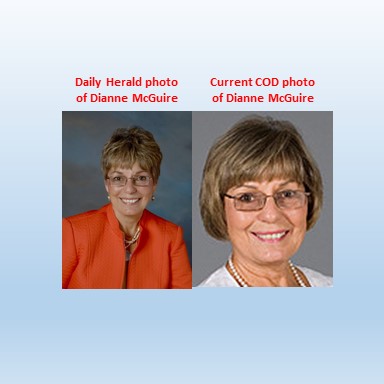 McGuire is the same trustee, along with another local Democrat that filed an ARDC complaint against the board attorney.  The current letter sent to the Daily Herald just shows us, even after the ARDC ruled her complaint unfounded, she just cannot accept being wrong.
Instead, she continues to lie. As reported by the Herald, “McGuire says she wants the firm replaced because of, among other things, Elliott’s close relationship with former clients who have been adversaries of the college.”

Any wonder who she is talking about?

Let’s dissect her lies once again:

I find it amazing that our organization and For the Good of Illinois are “adversaries” in her mind.  Yes, we took COD to court because past council lied to the Attorney General by claiming if asked they would move to a larger room.  We asked multiple times and they refused to follow the law.  It was clear COD was not our adversaries, Breuder and his minions were.  We are not and never have been adversaries to the college. 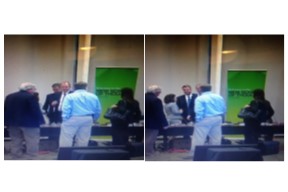 I wish someone would have snapped a picture of McGuire talking to us during the break at a past COD Meeting.  Then we could use her logic and tell people that such a picture reflects we have a close relationship with McGuire…
Two Pictures!  Two pictures that were taken literally seconds apart and this is supposed to be an influencing factor for a law firm to resign?
Considering McGuire is such a fine investigator on matters, she would have known that the purpose of that conversation was in relation to a FOIA response.   It was COD business that took all of 2 minutes to get clarification.  Sadly, once again McGuire misrepresents the facts.

How ironic that the very woman who refereed to those exposing wrong doing as Nazi’s is now calling for common courtesy.

I find it amusing to see those exposed for illegal acts react. Instead of doing the right thing they deflect and fabricate.  They build straw men arguments  and will go to any level possible to divert attention from the truth. Our exposure of truth about Trustee McGuire is not an attack, nor have we ever thrown vicious insults at minority members of the board.  Her perception is that our exposing her and others may be an attack and vicious insults, however, telling the truth is all we have done.  Clearly the truth hurts.

Public comment is a time for the public to say what they wish to their government.  Regardless of a call for common courtesy, the law does not allow you to silence people’s speech because you don’t like being exposed.  Just as you could sit in that meeting and attack those exposing illegal acts and throw vicious insults by calling people Nazis, so too can any citizen at a meeting.

In addition, for you to imply that an attorney for the board has any authority or obligation to interject during a public comment  shows us once again what a waist of money it was sending you to ACCT training conferences, as you have no understanding of the role such a person has in a meeting, which is not to interject to limit a person’s speech protected by law!

Another lie.  In fact, the current board went above and beyond what the law requires when it comes to hiring a law firm.

Continued lies, misinformation, and grandstanding appears to most people to be the primary reason there is division with McGuire and the majority of the board, although she is entitled to her opinion.

Another lie in which she got called out publicly for at last nights meeting during public comment.

No one forced her to file a FOIA for information and that too was exposed as a lie at last nights meeting during public comment.

Interesting the previous firms rates never bothered her, and I understand they are basically the same rate.

How special Ms. McGuire.  Not one shred of evidence to support a claim that his campaign is at odds with representation of COD, but since you said it, it must be true?   Using her logic any attorney running for a political office should resign from representing their clients because they would be at odds with them.
Another reference to billing as being obscene without telling anyone that it is the same as the previous firm.  That is grandstanding and sensationalizing with no facts to back it up.
For her to claim a lawyer’s billing gives the appearance that he  may be financing his campaign through his work at COD without one shred of fact, is yet another example of how this woman will lie at all costs to get attention.   We challenge her to provide one shred of evidence to support her statement.

Once again McGuire just can’t get even a shred of truth into her malicious and false narrative.  For the Good of Illinois is a 501c3 who by law is not allowed to be involved in political activities.   As far as us attacking political opponents, there is that false narrative again.
When we expose truth, good or bad, it is not an attack and it is perfectly legal. It should also be noted that we have not attacked the past or current COD members.  We have exposed malfeasance of their actions and will continue, just as we are with this response to her letter of lies.
And for the record, our purpose is not about helping people win an election.  It is about exposing bad government and properly vetting those who wish to represent the people. Which by the way is yet another constitutionally protected right!

Her closing paragraph tells us all we need to know with this political grand-stander.

Ms. McGuire, if counsel was not representing the entire board you would have grounds for an ARDC complaint, which you already tried that and failed.  The rest of your questions are from the text book of political hatchet jobs.  Each question has no basis to support it but the implication garners headlines.
It is no different than a person asking you: “Have you stopped beating your kids?”  I have no proof that you ever had but the question leads people to believe you had.  That is how political hacks operate and it appears you are a master  at it.

Need more examples of how this works Ms. McGuire?