Springfield, IL. (ECWd) -
We have heard rumors of this for a little over a week, and according to CapitolFax, in a post yesterday, they state they have confirmed that State Representative Adam Brown (R), Champaign, will not seek another term in office. He says he intends to take over operations of the family's six-generation farming operations.
The 102nd District covers parts of Champaign, Douglas, Edgar, Macon, Moultrie, Shelby and Vermilion Counties.
This was unusual for an announcement to come this early in the election season, which leaves us to wonder if Brown intends to serve out the remainder of his term or resign early and have a replacement appointed.
Much more to come as this situation unfolds... 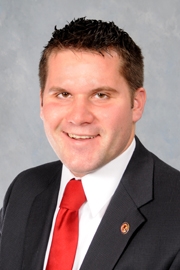