feature, For the Good of Illinois, Morgan County

Two individuals who have been part of a months-long effort to bring transparency to local government have been honored for their work.
Mike Woodyard, an organizer of the Morgan County Watchdogs group, and attorney Tyson Manker were presented the annual state “Courage Award” by the founder of the website OpenTheBooks.com last Thursday. Fifteen awards were handed out in total.
Morgan County Watchdogs has submitted dozens of Freedom of Information Act requests for documents from the Village of South Jacksonville in the aftermath of a springtime report aired on our radio station that focused on a 2014 Illinois State Police investigation into alleged wrongdoing by village officials.
Manker filed an ethics complaint on behalf of hundreds of people who signed petitions soon after the story broke calling for the resignation of the village mayor, treasurer and police chief. All three have since stepped down.
Manker and Woodyard appeared on this...continue reading... 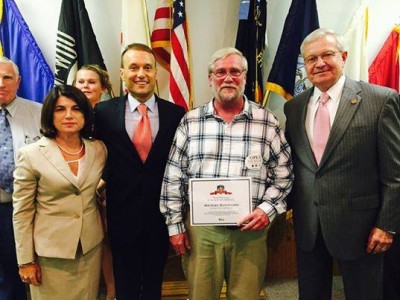