Wow, where do I start?

“Only two candidates are qualified to guide COD back on track”

So you want people to have trust in the very same people that ran the train off the track? You are part of the problem!

Are you sure?: Illinois Community College Board investigating COD for allegedly fudging the FTE enrollment numbers (here).

Was it because of price-fixing across the northern part of the state? (here)

“Despite all the problems with COD leadership…”

At least you acknowledged all the problems. You failed to admit that you are part of that problematic leadership and part of “all the problems” and you still want to win another term to create more damage?

“Want to know the real story? Ask us!”

People have been asking…every month…with NO answers. Are you afraid to answer them in a public meeting?

People have been asking, and you have not bothered to answer. Now they know where to go for the answers, and that is to the media.

You claim “special interest groups” are trying to “dismantle” COD, which is far from the truth and the real story. These groups, and regular people like us simply wanting accountability of the law – and you have failed them.

You voted for the $760,000.00 severance package for a failing president. You are the problem.

You voted in favor of placing his name on a building. You are the problem.

You failed to monitor no-bid contracts. You are the problem.

You argued against posting the IMPREST accounts online. You are the problem.

You voted to silence the public through restrictive meeting rules. You are the problem.

You wined and dined at taxpayer expense before meetings. You are the problem. 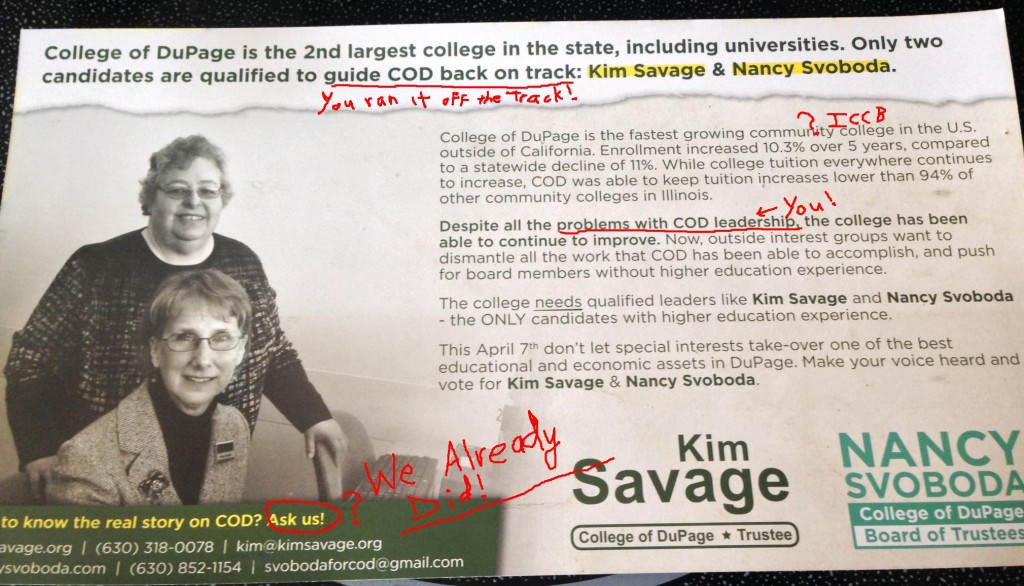