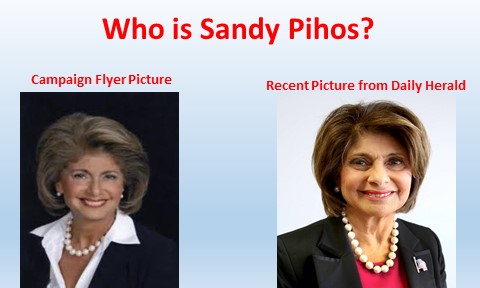 During the 2014 Primary for State Representative race, there were two candidates for the voters to pick from. Sandy Pihos, a long term professional politician, and Peter Breen, a newcomer to state level politics and staunch conservative.

The Daily Herald endorsed Pihos over Breen in spite of their own reservations.

"At the outset, we must acknowledge our reservation that Pihos appears to give lip service rather than real support to public pension reform, a crucial aspect of any attempt to get Illinois' fiscal house in order. She voted against two reform measures that passed the House last year, and that's a cause for legitimate concern."

In the March 18, 2014 primary election the voters chose Breen over Pihos (8223 to 6255) as the Republican candidate to run in the November 4, 2014 general election. The voters rejected the professional politician even with the local media endorsement!

Why would The Daily Herald again, very recently, endorse a candidate who previously claimed she was for greater transparency by government agencies and who recently demonstrated, by her vote in the Illinois General Assembly, that she is for less government transparency and more restrictions on citizen's access to what the government is doing? The Daily Herald admitted (see 1st paragraph) they had reservations about Pihos in February, 2014. What were they thinking this time with the evidence of her vote fresh in their minds, let alone the outcome of the primary proving the public saw it differently?

Well, it's election time. When you hear claims of "fiscal conservative", "we need more transparency," and "accountable to you", check the voting record.

Key issues that most voters may not be aware of, but play a serious role in the success of not only our local government but the education of our young.

I suspect anyone willing to read the information and do some more of their own research will come up with the same conclusion as I did, which is that Sandy Pihos has no place in public office!