In what has turned out to be a continuing struggle for Truth and accountability at the Edgar County Airport,  we have recently uncovered more evidence that the current airport manager, Jerry Griffin, deceived the public and the county on his job application, and by that deceit has cheated a well qualified candidate out of a job.

We have previously covered his false statements in reference to his pilot’s license and instructor qualification – and the fact that his medical exam, a requirement to fly and instruct, had been expired for more than 16 years (here), and the fact that he did not possess an A & P Certification which is required when performing maintenance and inspections on aircraft as he expressed on his application.

This particular article lays out the fact that Jerry Griffin has never worked for the Aviator Flight School, has never given flight instructions for them, has never performed 100 hour inspections for aircraft at the service center (nor had anyone “sign off” on what he performed), and lied about all of it on his application – cheating another qualified person out of a job! (job application here)

“I hereby affirm that the information provided on this application (and accompanying resume, if any) is true and complete. I understand that any false or misleading representations or omissions on the application or during the hiring process may disqualify me from further consideration for employment and may result in discharge even if discovered at a later date.“

Yes, he signed it – twice. There is absolutely no reason Jerry Griffin should work one more minute for the County of Edgar. He cheated another qualified applicant out of a job…he stole the job for personal gain.

The original article on his job application where we proved his medical expired over 16 years ago and he could not legally fly or give flight instruction with an expired medical. He can give instrument instruction and fly with another pilot in command – but he did not reveal that on his application.

He also stated on his application that he performed 100 hour inspections on aircraft – that is not legally possible since he does not have an A&P Certification that is required by the FAA for maintenance and inspection of aircraft.

Additionally, during the interview process, the Board allowed people in the interview room that were neither appointed to a board, elected to a board, nor were they employees of the county – but somehow they were allowed to attend the interviews and ask questions of the two candidates. The majority of the questions asked during the interview had nothing to do with the job applied for. Incidentally, the other candidate is a retired (active duty) Army Chief Warrant Officer 3 (CWO-3) that was a helicopter test pilot and currently possesses a pilot’s license (eligible for certification). He spent over 20 years in the Army and attended all kinds of leadership and management schools that could have been effectively used by Edgar County at this airport – but this County Board would have nothing of the sort!

Then you add to that the secretive aircraft crash that occurred this past summer, it went unreported, and we believe Jerry Griffin was giving flight lessons or was otherwise piloting the aircraft. He claimed it happened before he was the manager, but according to fuel purchases it happened after he was the manager. Nobody will say anything about the crash, nobody knows what day it happened,  and nobody knows how the totaled aircraft got from the runway into the t-hangar. The excuses keep changing, one excuse was that a deer ran out on the runway causing the pilot to steer to avoid it – BUT when at an IDOT meeting (sometime after the crash) in Springfield (Rob Bogue and I attended also) the IDOT engineer mentioned money available for deer and other animal deterrence, and Jerry Griffin told him we have never had a problem with deer, so we don’t need that money.

Most recent crash articles where we believe, but cannot prove yet, that Jerry Griffin was either flying or teaching the plane owner’s daughter to fly:

Another “coincidence” is that one of Jerry Griffin’s references listed on his job application is none other than the owner of the now-crashed plane – Jerry Newlin.

NOW we get to the other parts of his job application. Specifically where he wrote down his past employment:

Mr. Griffin also indicated a 5 year history as a mechanic at the Aviator Flight School in Fort Pierce, Florida: from 2005 to 2010. Then Jerry went on to say he worked for the Aircraft Service Center of Fort Pierce Florida wherein he performed as an Airframe and Power Plant mechanic providing 100 hour inspections on their flight school aircraft from 2007 to 2010.

Nether statement is true or correct. According to documents received this past week from Mr. Chris Speer, Director of Maintenance at the Aviator Flight School: Jerry Griffin was never employed by the Aviator flight school of Fort Pierce Florida. If you choose to investigate further, you will find this school is well established, very professional, and with an impeccable reputation.

Additional information was also received in this past week from Hassan Ghaffari, the owner of the Aircraft Service Center (his business has closed). In discussions and subsequent correspondence, Mr. Ghaffari made it crystal clear that Jerry Griffin’s responsibilities were to wash aircraft, to sweep floors, and that he occasionally assisted in the removal of cumbersome aircraft engine cowlings and inspection covers (a job requiring more than one person). He did not perform any Airframe or Power plant (or A and P maintenance) and that Mr. Ghaffari, the owner of the business did not sign off on any A and P worked performed by Jerry Griffin. In other words, Jerry Griffin was not an A and P apprentice mechanic in training when working for the Aircraft Service Center; he did not perform A and P work for the Aircraft Service Center on school aircraft and the statements he made in his job application to Edgar County and all others regarding the same are all false.

The damning emails are below:

Hello Rob as I had mentioned to you several times during the phone call Jerry is not an AP and has only been our helper cleaner washing ac and moping floor and he would help remove panels and cowling when needed , to my knowledge he did not do any flight instruction while he worked with us and I have my Pilots license and I took Jerry up for 1 or 2 local flights , best of luck to you

Yes and I have reviewed our employee files and he never worked for us. He did work with Aircraft Service Center. They would preform some 100hr inspections for us on a needed bases.

Chris,
Did you happen to recieve a copy of an e-mail that I sent to Hassan Gaffari this morning regarding Jerry Griffin? If so please let me know. Thanks, Rob 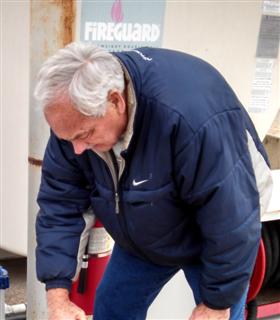