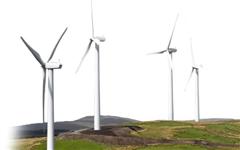 Despite last week’s statements by the Livingston County Zoning Administrator that citizens did not need to attend this week’s Regional Planning Commission meeting, 50 persons attended tonight’s (Feb 2, 2015) meeting to see whether the RPC would recommend approval of Invenergy’s Pleasant Ridge wind project.
The issue before the RPC was whether the project complied with the county’s Comprehensive Plan, which is a condition of approval of the project.  The Zoning Administrator stated that the RPC’s decision would be a non-binding recommendation to the County Board.
Invenergy has applied for a special use permit to build a 134-turbine project with a footprint covering 58,000 acres of prime farm ground.  Of these, 36,000 acres are listed as owned by participating landowners, of which many are not resident on the site.  Tonight the Livingston County Regional Commission voted unanimously to deem the applicant’s study insufficient.  The consultant’s study focused on whether the project was consistent with agricultural uses, but as RPC commissioner Dee Woodburn pointed out, that did not address Comprehensive Plan requirements on health, safety, or the property values of non-participating residents of the area.  She also noted that the IDNR had many concerns.
A member of the audience also spoke up to clarify some of the statements made by the Zoning Administrator.  Another member of the audience asked how the RPC could make a decision when they had not reviewed any evidence except a report that was essentially hearsay.  When the Zoning Administrator noted that recordings of the ZBA hearings were available to RPC members, she asked if the RPC members had in fact reviewed the hearings.  Most did not respond but one RPC member noted that he had listened to all 14 nights of testimony and the hearings before the ZBA had brought out a lot of interesting information.
The RPC acknowledged that the citizens were not done presenting their witnesses.  Another RPC member then expressed a desire to hear more evidence regarding RPC issues that overlapped with the ZBA review.  Another RPC member noted that the applicant’s study stated that the project did not violate any of the local cities’ comprehensive plans, but his city had not been asked and he would know because he is the mayor.  He wondered what other aspects of the report might be false as well.  In the end, a motion was made and seconded to deem the report insufficient, i.e., to not recommend approval of the project.  All members voted in favor of the motion.
This was the fourth time the Livingston County RPC had dealt with an application to build an industrial wind project; the first three were given a pass without fanfare, but this time there was a good discussion and review.
Afterward the vote, about 10 members of the public made comments.  They thanked the members of the RPC for doing their homework and asking questions.  Several offered additional information about the project.
The Zoning Board of Appeals will meet on February 5 at 7 PM at the Historic Courthouse to discuss various issues, possibly including adoption of a property value guarantee requirement and other wind-related matters not specifically dealing with consideration of the special use permit application that is still pending.  The Pleasant Ridge special use permit application hearings before the Livingston County Zoning Board of Appeals will continue February 9 & 10.  For more information, go to http://www.livingstoncounty-il.org/wordpress/county-services/zoning-and-planning/wind-energy-projects/pleasant-ridge-application-and-exhibits/ (mainly the application and exhibits) or http://www.pcwindfarm.org (for up to date schedules and other information provided by a citizens’ group).
If I can help any citizen who wants to participate in this important process, please do not hesitate to contact me at (815) 842-2486.  I continue to be grateful for the opportunity to serve all our citizens and work with you to leave the County better than we found it.  I believe this is the privilege and the duty of every generation.  Thank you.
Yours truly,
Carolyn Gerwin
Livingston County Board Member