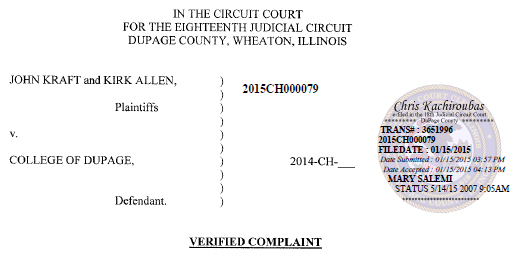 In September and October of 2014, and December of 2013, several Freedom of Information Act requests were denied by the College of DuPage FOIA Officer. After several failed attempts at asking them to provide the public records they were bound by law to provide, we decided it was time to file suit in DuPage County Circuit Court.

The W-2: In spite of the fact that AG Pratt had told me over the phone that she would reconsider the PACs determination, no response was forthcoming after my letter to her. With that in mind, and the desire to review public records we are lawfully entitled to, the below civil suit was filed today, January 15, 2015 in DuPage County Circuit Court. (article here) (AG Advisory Opinion here) (my response to the AG here)

The Invoices: On the heals of the Chicago Tribune story in reference to the DuPage County State's Attorney, along with the College of DuPage attempting to have the invoices sealed from "Chicago Tribune" and "Open the Books", and then the Court reversing its decision, we filed a FOIA suit for the same records involved in the attempted sealing. We were not named as Defendants in the order sealing the records, even though we had requested them at an earlier date. The College simply denied access to them in our requests.