The president of the College of DuPage is still whining to the press, at least the press that still listens to him, about recent board meetings. I have to wonder why he is even commenting on board member actions and questioning any of their motivations. Does he not know that is insubordination? Wait, never mind, he was "born to lead". LOL. Click here to read his latest temper tantrum.

We already know that Breuder himself lies about reasons to go after grants. It is quite evident in the most expensive email in Illinois history. How a college president can send out an email colluding to have all board members lie about the purpose of grant funds - and keep his job, is beyond comprehension - especially when he cannot bring himself to admit it was wrong, but he had COD to pay an attorney to write a letter saying the email should not have been released. I guess that makes it all better now.

It appears that Breuder finally found one book that agrees with him, written by someone that has never been a trustee, and he has to repeat the only talking points that fit his agenda, and repeat them enough times where people believe his lies as truth.  Breuder's statements about Hamilton come from studies cited in the book that are fatally flawed. Fatally flawed because the surveys were not from random samples, they were from college presidents with an agenda behind their answers. This is their attempt at labeling anyone not agreeing with them a "rogue".

Finally, Breuder talks about distorting, misrepresenting, lies, skewing, and embellishing. He refuses to acknowledge the lies, distortions, embellishment, misrepresentations, and skewing in the illegal censure resolution passed during the August meeting. He never once denies what most consider the criminal acts performed by him in using public credit and public funds for nonpublic purposes. Mainly his private membership to Max McGraw's and the three satellite phones rented for the past three years to take on his personal hunting trips. These are paid out of education funds and they are not for a public purpose. I call it theft, but maybe my language is too harsh.

When are the news organizations in DuPage and Cook  Counties going to step up to the plate and ask the hard questions? Do they even want the truth? 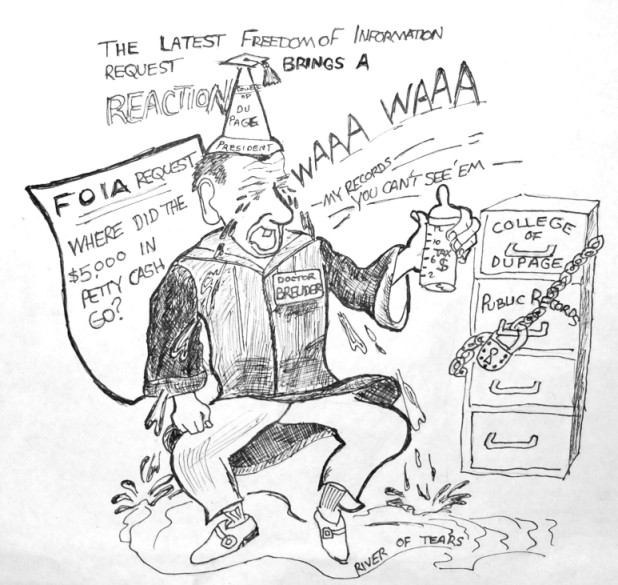