SPRINGFIELD, IL. (ECWd) -
Governor Pat Quinn's appointee, Eric E. Gregg (Bio here), current Illinois Prisoner Review Board Member (IPRB) and former Mayor of Harrisburg, IL. has taken to acting like a criminal lately by issuing threats to local businesses for exercising their right to sell newspapers. Gregg was appointed to the board by Gov. Pat Quinn last year, remaining as the Mayor of Harrisburg in violation of State law for several months after his appointment.
During his tenure in Harrisburg there were, and still are, discrepancies in excess of $400,000 in city financial accounts. He even relieved an employee of his job for pointing out the obvious.
Disclosure has written an in-depth article on Gregg in the June-July 2014 issue, detailing how his threats and intimidation resulted in a police report being filed against him.
Watchdogs ask: "Is this how a member of the Illinois Prisoner Review Board should act?"
He is getting paid over $68,000 per year for this appointment, and yet he thinks he can go out and "allegedly" commit felonies, such as intimidation and threats, with impunity.
Read the article online HERE  (subscription required) or get a copy of the printed version that should be available in Kansas and Vermillion on Thursday, and everywhere else during normal delivery times/dates.. 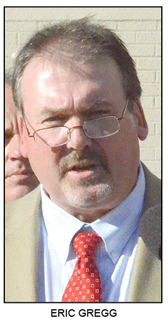