In the run up to help convince the residents of Naperville, Illinois that a smart grid was a good thing to invest in, the Mayor and City Council decided it would be a good idea to hire a Public Relations firm to assist in distributing propaganda to their residents. The mission? To flood the city with good PR on Smart Grid / Smart Meters and quash all dissent at any cost.
Things weren’t going so well with the public, so with the assistance and advice of the United States Department of Energy, Naperville used taxpayer funds and hired “West Monroe Partners” (WMP) to conduct some public relations on their behalf.
On Tuesday, March 29, 2011, Mr. David Tilson of West Monroe Partners emailed Brian Quirke, DOE, and laid it all out for him (Read the email). He made reference to “the opposition” and even went on to state that they (WMP) have been working on “inserting” speakers during the public forum that support the program. He also indicated that they have the full support of the city council. Tilson even appears to be asking the DOE for assistance with this.
Tilson to Quirke: “I'd like the opportunity to discuss the different options for DOE support that might be available to the City of Naperville. For example, there is a City Council meeting where this group has been airing their grievances during an open forum and we've been working to insert speakers into that forum that support the program.”
During public hearings and city council meetings, this hit team of PR professionals went to work behind the scenes. When a taxpaying resident spoke out against the Smart Meter program, a representative of the PR firm would speak in favor of the move. Thereby giving the appearance of public support.
Let’s face the obvious: How bad of a product must you have that you resort to paying people to speak in favor of it?
The bottom line in this situation is that the City of Naperville used public funds to insert speakers during public forums to counter opposing statements made by residents. They certainly did not inform anyone present that these speakers were planted there by the city and West Monroe Partners.
[gview file="https://edgarcountywatchdogs.com/wp-content/uploads/2014/04/Doc-12-RE-Smart-Meter-Safety-Security-Position-for-City-of-Naperville.pdf" save="1"]
. 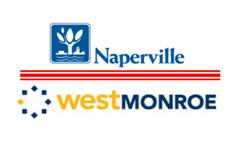