—Missing funds from a local township have resulted in an investigation that is set to expand into the federal realm.
Officials have reported that a recent internal audit of the books for Lawrence Township showed a shortfall over the past two years of “just over $30,000” (the exact amount was unavailable as of press time and further audits are being conducted to determine exactly how much is missing and how far back it’s believed the actions that caused the money to disappear were taking place.)
At the center of the mess is former Township Supervisor Kimberly Yost-Winningham, 34, who was just re-elected to that position in April 2013.
Yost-Winningham resigned her position when she was confronted with the accusations, reportedly in early March, this according to township officials who spoke with Disclosure on the matter.
Greg Lewis, Township Clerk, was contacted because of persistent rumors abounding through
– Continue reading by clicking here (subscription required). 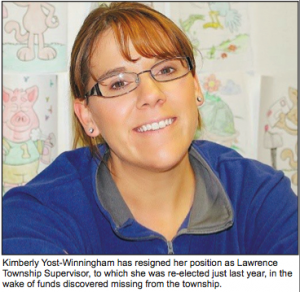