Liars & thieves are the only words that can describe these despicable people who pulled the wool over the eyes of so many they were supposed to help.  They should be in jail for their actions!

It’s so amazing I don’t even know where to start.  I have said many times, we usually know with the first FOIA response if they are hiding something and sure enough, Julie Clark failed to give us the credit card info in our first request.  Little did we know the habitual liar would be so deeply involved in criminal activity?

One of my requests for solar panel contracts with Day & Night solar generated this signed letter from Julie Clark.  (Click here to download letter).  It was referenced in one of our first articles exposing the red flags we uncovered with this criminal operation.  (Click here for article).

All indications are that the $50,000.00 forensic audit found something that Julie Clark claimed didn’t exist, a signed contract with Day & Night Solar! The summary on page 8 of the forensic audit confirms what we reported on which was that the FIPHD minutes reflect the administrator signed a contract on July 1, 2011. (Click here for Audit – see page 8)

Bring Doug Corbett into the fold and it’s clear as fine crystal the manipulation is under way to deceive the public.  Doug Corbett sends an e-mail advising Julie Clark, her husband Stan Clark, and Cary Hagen.  There are many serious concerns with that communication.

Does anyone with even a smidgen of intelligence think that statement is true?  Stating you don’t have to bid out anything over $10,000.00 implies that you “do” have to bid out things under $10,000.00, which would make very little sense.  And if that is not convincing enough, the e-mail from the states attorney confirms the claim being made is not true!  (Click here for e-mail from states attorney)

If Cary Hagen is the one who claimed to have spoken with the State’s Attorney and provided the information to Corbett, why would he CC her on a communication that tells her what she should already know?

Why would an Administrator be communicating directly with a potential contractor in this fashion?

What is telling is the response e-mail from Julie Clark, which she sent to Corbett and her husband, Stan Clark.  (Click here to see e-mails).  In less than two hours Julie Clark provides the procurement policy and it clearly does not conform to what Mr. Corbett is claiming!  (Click here for procurement policy).  In fact, it clearly contradicts the claims attributed to Cary Hagen!

I raised the Economic Interest Disclosure issue and a claim was made by Julie Clark that she was told she wasn’t required to fill one out.  She placed that claim on the back of the County Clerk.  (Click here for previous article).  One need only read the very email she received and responded to, and you can confirm she knew she was required to fill out the document and disclose the information yet she never did!  Doing so would have exposed what we all now know!

It was one big scam being orchestrated by Doug Corbett and Julie Clark at a minimum. The forensic audit confirms a contract was signed July 1st of 2011, which is only 6 days after Julie Clark’s email claiming they could advertise in a couple papers. Corbett claims in an October 7, 2011 document (Click here for document) that he was given authorization at the July 18, 2011 meeting and needed permission to carry out the contract with Day & Night Solar. How can this be true when the board minutes reflect, as does the forensic audit, the contract was signed July 1st, 2011, which was 27 days before any publication ever existed asking for bids!

It’s clear reading the very email Julie Clark sent to Doug Corbett on June 24th she was well aware of a procurement policy. She has been caught in more lies than any other public official I have ever come across! (Click here for Paxton Record article confirming this) and (Click here to see her e-mail).

The facts don’t lie!  Doug Corbett and Julie Clark lied to the public and worked out an elaborate scheme to ensure Julie Clark and her husband received over $100,000.00 in a contract that they knew was in direct violation of their own policy, as well as the law.  Even after being caught they continued to lie and deceive the public by covering up documents and failing to provide requested records that would expose the fact they knew the rules.  What was in it for Doug?  Was it a paid vacation to Mexico?  Paid for by Stan and Julie Clark?  Oh what I would give to have access to their bank records during this time frame! We already know the cell phone records had charges from Mexico.

We can only pray that the federal authorities pass down indictments against these people and hold them accountable for the theft of our tax dollars because all indications nothing is being done at the county level, in spite of all the evidence. 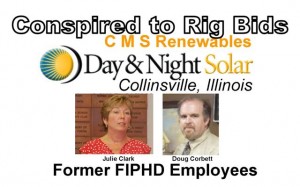