NAPERVILLE, IL. (ECWd) –
The City of Naperville has been on a roll lately. First they use PUBLIC FUNDS to pay a public relations firm, who then finds shills to plant in the audience during public meetings to speak in favor of the Smart Mater program.
Now there is evidence they have used public funds to hire a private detective service, “Illinois Investigative Solutions“, to investigate and harass local citizens.

Who is Investigative Solutions?

Simple. It is a company whose president is a Naperville Police Officer. Do you see how that works? The City of Naperville, when they can’t get the police involved, hire a P.I. firm who just happens to have access to all confidential police records. Then they use that PI to investigate their own taxpaying citizens. Kind of makes you sick thinking about it doesn’t it…Illinois Investigative Solutions was paid over $14,000 in 2013 by the City of Naperville. The President of which is a Naperville Police Officer.
The President of Investigative Solutions appears to be Naperville Police Department employee Tammy Spencer-Hale.
OK, so they use a PI and paid them. What is so wrong with that?
The Naperville Police Department, and ultimately the City of Naperville, has a personnel policy (CLICK HERE) that talks about “outside” employment of their police officers. It’s a pretty thorough policy that doesn’t leave many “interpretation” issues to think about.

Let’s look at Paragraph 22.4.1 (A) (2) and (b) first. It specifically states in (2) that they can take employment that presents no potential conflict of interest. Then it states: “Some examples of employment representing a conflict of interest are:”….and guess what comes next? That’s right!: (b) “personnel investigations for the private sector or any employment which might require the police employee to have access to police information, files, records, or services as a condition of employment.”

Ok, some people might say that is pretty vague and would not qualify as a conflict. We further qualify the restriction by pointing at Paragraph 22.4.1 (A) (2)(d), which states: ” Assisting (in any manner) the case preparation for any civil action in which the City of Naperville is involved, or for the defense in any criminal proceeding.“

Who Did They Investigate?

The City of Naperville hired Investigative Solutions to perform surveillance on a Mr. Marszalik for a period of at least 6 days in 2012 (Sep 23-28). This is the person that was hit by Officer Keating (who was suspended over it). Marszalik then sued the city, the city hired Illinois Investigative Solutions for  surveillance on him in direct violation of the NPD employment policy.

The real questions to ask the city is:  Who else have you hired a private investigator to go after? Opponents of the Smart Meters? Opponents of the Mayor or City Council members? Does an active police officer perform any work for the company she is the president of? 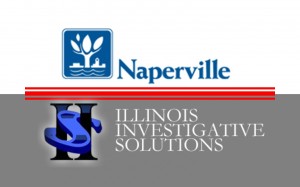