The first police report was made by Mary Weimar who contacted the Police Chief to get him to investigate her YouTube channel for anything they could harass her with. She suggested using a folk song Megan Fox sang at a Tea Party in 2010 against her. The police never contacted her about this, she learned about it through a FOIA request.
Here is the “offensive” folk music video that was posted 3 years before attending any OPPL meetings: https://www.youtube.com/watch?v=Vrm1TZg0VyY
.

The second police report came from the attorney, James Fessler, of Klein, Thorpe, and Jenkins, LTD., who was upset that someone had emailed links to where Megan Fox posted video of his foolish behavior during an OPPL public meeting on Oct 21, 2013. Keep in mind that the Open Meetings Act permits recording public meetings as a right, without having to notify anyone in the room. This is the same law firm that spawned the person in THIS article and THIS article. Anyway, this attorney called the police and made a police report presumably in an attempt at harassing Megan Fox, a mom who dared to speak during public session. Here is his complaint.
There are four videos he was apparently offended by: HERE — HERE — HERE — and HERE.

Nancy Wendt Healy calls the police again because Megan Fox dropped off an invitation to tea at her house after the Library blocked her email from being able to send it to her electronically, and the Library was proven to not be giving Nancy things dropped off for her at the Library. So Megan looked up her address via Google and dropped it off on her doorstep. She called the police and asked them to build “a record more than anything”. The police called her (Megan) at home, made up lies, and actually seemed kind of embarrassed doing it.
Part 1 = https://www.youtube.com/watch?v=ge1GvJz5aqM
Part 2 = https://www.youtube.com/watch?v=vGXHiKBcWoE

Nancy Wendt Healy called the police again, this time asking them to harass Megan because she didn’t like her Facebook page and wanted things removed. The police said no.

To top everything off, the Orland Park Public Library decided it was a good idea to post a “warning” in the middle of their webpage to warn their visitors of Megan Fox. I find it ironic that the library director and board members like the porn viewers so much they don’t even bother to warn their patrons about them, but they felt a warning was in order because people were attending board meetings and voicing their opinions.
To view the “warning” they put up on the Library’s official website in December about Kevin and Megan see the link below. So this was a taxpayer-funded salary employee using taxpayer resources to attack two members of the public (albeit being careful not to name them): http://pjmedia.com/lifestyle/2014/02/17/pro-porn-librarians-gone-wild/
Here’s an article or two from PJ Media on the OPPL requested police harassment: http://pjmedia.com/lifestyle/2014/01/06/the-price-i-paid-for-fighting-for-a-library-free-of-porn-and-sex-offenders/  and http://pjmedia.com/lifestyle/2013/12/04/orland-park-public-library-calls-police-5-times-on-critics-but-fails-to-report-sex-offenders/ 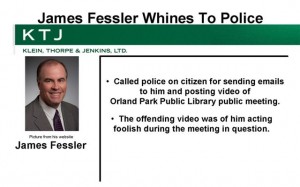