It’s well known in politics, if you follow the money you can pretty much tell what you’re going to get because contributions of this magnitude bring commitments to policy, even though they deny that on the campaign trail.

Springfield and Chicago union bosses along with local Democrats are plotting to hi-jack the 110th state rep race by taking the true conservative voices away.

Your family farms and your livelihoods are at risk from the Chicago union bosses. You can’t move your farming operation and Chicago democrat Mike Madigan knows it. The only way to keep feeding the union bosses is to tax you and farmland out of existence.

So exactly what is the truth behind Darrel Cox and the recent funding from these people?

The Illinois Education Association has now provided $25,000.00 to Darrel Cox’s campaign.  What interests do those Union Bosses have in supporting Darrel Cox?  Clearly the vast majority of the teachers we have spoken with don’t support a breast grabbing drunkard so what’s the back story to this kind of support?  ( $10,000.00 Contribution – $15,000.00 Contribution)

Why are the historically Democrat donors supporting Darrel Cox, a Republican?

Considering Darrel Cox refuses to reject a second pension if elected, it’s clear he feels entitled to yet another public pension for his 90 days of work that is required each year.  Of Course the Union Bosses support this kind of candidate because he would in turn support bigger pensions.

Who backed the last Triple Dipping State Representative for this district?  The very same people now supporting Darrel Cox who is seeking to establish at a minimum a double dipping pension.

It’s bad enough that the state isn’t keeping its promise to fund the pension obligations so many were promised and worked diligently to earn but now we have to compound that problem with candidates like Darrel Cox who think they deserve yet another pension and health care benefits for less than 100 days of work a year!

Can the taxpayer afford Darrel Cox?

As if the Big Union Bosses controlling the teacher’s hard earned money isn’t bad enough, we can compound that sickness with the Big Labor Union Bosses who are also backing Darrel Cox.  (Contribution from Labor Union)

I think most would agree, and polling confirms it, We the People are sick and tired of the establishment making the rules that work for them and do so by placing the burden of paying for it on the backs of the taxpayers.

The major factor so many fail to realize in this particular race is the importance of selecting a candidate that can in fact win in November against a Democrat challenger.  I think the baggage on Darrel Cox as well as Kevin Garner is such that neither one stands a chance in November to that type of challenge.  The Union Bosses know this and who they back proves that.  The Democrats can’t afford to have Reggie Phillips win this primary because attacking a successful businessman is far tougher than exposing Darrel Cox and Kevin Garner, as they created their own negative history for all to use. 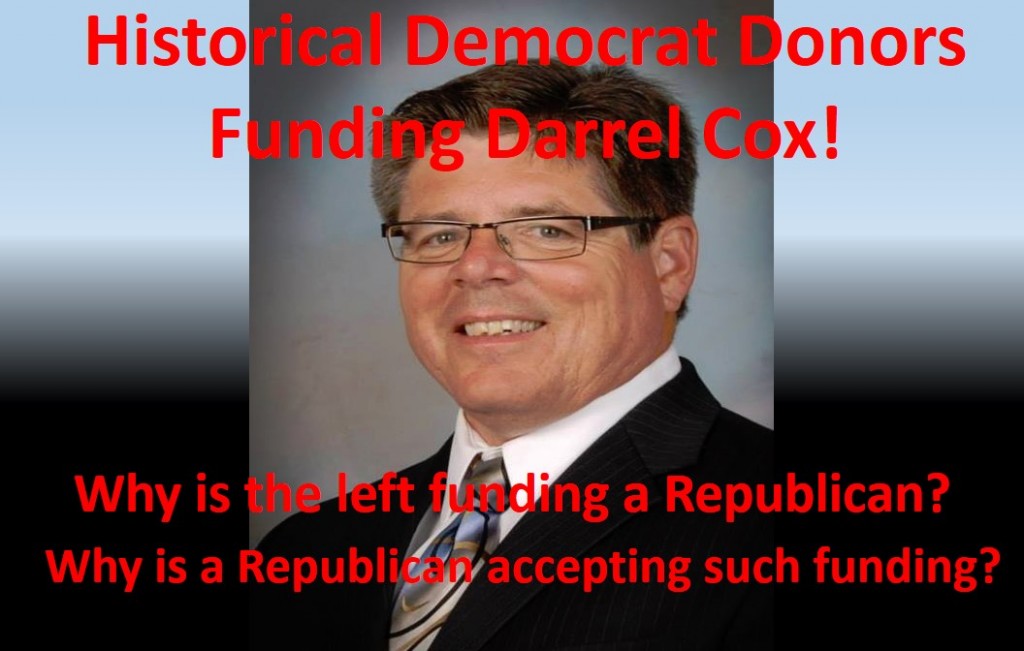