PARIS, IL. (ECWd) –
Edgar County entered into a contract with an auditing firm out of Danville, Illinois by the name of DBH and Associates, 2200-Suite A, Kickapoo Drive, PH: 217-431-0200. This contract was to audit the books of Edgar County for their fiscal year of 2010. The audit was finished and presented as a factual document to the Edgar County Board in 2011.
It was about a year later, when by chance, we looked at that audit while researching a particular subject. Towards the end of the audit was a statement presented as a fact in the official county audit, that statement read:

Effective October 1, 2003, in consideration of $100,000 and the assumption of all assets and liabilities, including a $293,316 real estate loan, the County turned over the operations of the ambulance service to buyers Dee E. Burgin and Lisa L. Burgin d/b/a Edgar County Special Service Area Ambulance, Inc. Per a new agreement September 1, 2005 to August 31, 2010, the Special Service Area No. 1 Ambulance District will pay back the $100,000 by making monthly payments at $800 per month at zero percent interest. The amount owed at November 30, 2010 is $-0-.

We have an extremely detailed explanation (read these articles), with supporting documentation, showing the above “Note 12 – Notes Receivable” as being a complete fabrication, void of any facts.

We are convinced that this was nothing more than an attempt at forging a public record to protect those that permitted this evil. It was inserted in this audit because that was the time-frame where we were exposing the fraud against the people of the county with the "sale" theft of the ambulance service in 2003. They probably didn’t expect anyone to stumble across the statement since rarely does anyone read it.

After seeing the “Note” in the audit, I submitted a FOIA request to the county clerk and county treasurer for all information and documentation supporting the insertion of that “Note” into the audit. The answer came back as “we have no supporting documentation“. I then asked them to contact the auditors for the information and the reply was that “The auditing firm stated they are not a public body and are not subject to the Freedom Of Information Act“.

Knowing that they were indeed subject to the FOI Act by virtue of contracting with and holding documents for a public body, I filed a Request For Review (Feb. 5, 2013) with the Illinois Attorney General’s Public Access Bureau (PAC) for a determination on the FOIA denial. Their determination (2013 PAC 23483) was received this week, and it stated that the county clerk, county treasurer, and the auditing firm do not have any records pertaining to the request, therefore no further action is required. Kind of what I expected, along with a denial from DBH & Associates that the documents are available.

This denial from DBH & Associates us leads to more questions.
1. Are auditing firms required to keep all records related to statements presented as fact in the audits they complete?
2. Does an auditor have a RESPONSIBILITY to ensure all statements in an audit are based on fact?
3. Does a citizen have a RIGHT and a RESPONSIBILITY to ensure an audit of a public body is accurate?
3. Why would an auditing firm insert a false statement lie into an audit?
4.  Who is the person responsible for directing the auditor to insert the false “Note” into the audit without facts to support it?
5. What can our current county board do to correct the audit?

During the January 27, 2014 County Board study session, I asked the board to 1) contact DBH & Associates and demand answers to the allegations, and, 2) either demand DBH & Associates present a corrected audit report with the offending “Note” removed or to provide documentation supporting the truthfulness of the “Note”. The board agreed and stated they would ask the auditor for information related to that “Note”.

Since I know, as a matter of documented fact, there are no records and have never been any records supporting the truthfulness of the “Note”, I expect DBH & Associates to either present a corrected audit with the statement removed, or to refuse to do anything. Should they refuse to do anything, I will demand justice in whatever venue it takes to achieve justice. In the words of Dr. Livingston Smith, who opined that  investigative journalists, and media in general, have a duty to the public of “Fostering a climate of public opinion which regards the corrupt, however rich and powerful they may be, with the contempt they deserve.” All working towards the  end result of correcting this injustice perpetrated on the residents of Edgar County by a few evil people in collusion with each other to defraud the history of this county.

The county board members in office at the time this occurred were: former board members  Jim Keller, Jeff Pointer, Verlin Funkhouser, and Kevin Trogdon, and current board members Ben Jenness, Karl Farnham Jr., and Jeff Voigt. Finally, we have Mark Isaf, the Edgar County State’s Attorney (we have no evidence of wrongdoing on his part), and the center of this controversy, Mr. Dee Burgin, former Deputy Sheriff found guilty in Federal Court of violating the civil rights of a female in his custody.

The Past Is Our Future

There have been some people that keep asking us why we are worrying about things in the past when we should be working towards the future. It’s pretty simple really: our past is our future. Public records record the history of Edgar County for all to see. Is it too much to ask that this history be based on truth instead of lies?
Government audits are designed to simply check that the numbers listed are correct. They are not for determining if the money was spent properly, only that it was spent. They use only the information given them by the local public officials – nothing else. Need we remind you of Dixon, Illinois where the town clerk planned and executed the single largest municipal theft in the history of the United States? All while the audits were squeaky clean?
How about a reminder of the Ford-Iroquois Public Health Department where the Ford County Board proudly pronounced that every audit for the past 10 years had concluded there were no problems…a clean bill of health?
We finally convinced them to look at the public records we had that showed fraud in the millions of dollars. That organization will be formally dissolved as of July 2014 as a direct result of mismanagement of funds.
When you read in the paper that a clean audit was presented and a picture of “all is in order” is presented, you can rest assured the whole story is not told, as that is not how audits work with today’s government.  From illegal expenditures to outright theft, audits mean little if they are not of the forensic nature. Need we look any further than the “clean audits” that failed to expose Chandra Smith’s theft of funds, or the County Airport that held numerous secret CD’s and Bank Accounts?

More Audit information to come and it will shock anyone with the most basic understanding of finances! 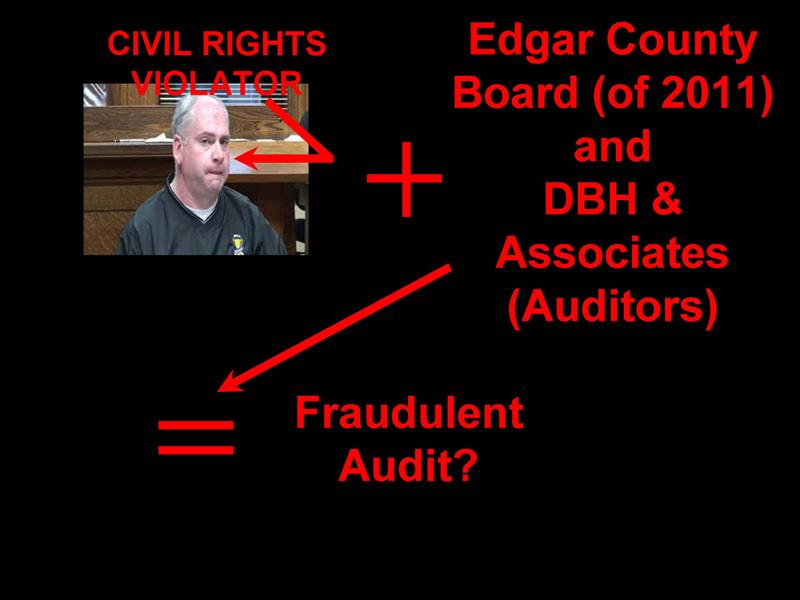