Darrel Cox, the truth eludes him!

If I have said it once, I have said it a hundred times, zebras don’t change their stripes. When a judge can see that 17 years of progressive discipline has had no effect, is it any wonder that the same person still has a problem with telling the whole truth, even while asking for your votes?

During the recent farm bureau meet the candidate forum the candidates for the 110th State Representative race each got 2 minutes to introduce themselves.  Sadly, the farm bureau refused to allow public questions and asked that if you have a question you ask it later when the candidates mingled with those present.

The stripes of Darrel Cox have not changed and his own words prove yet again, the truth evades the mental capacity of this man.  While making claims about his 3 Billion dollar budget, which I think he meant to say $3 Million, which is also incorrect, he took pride in his management skills pertaining to that budget and stated:

Is that so Darrel?

What do the facts reflect Mr. Cox? Since the 2013 audits are not complete let’s just look at his terms in office and see what the truth reflects.

Original budget numbers vs. Actual expenditure numbers taken directly from the Coles County Audits that were received through a simple FOIA request and reflect over budget numbers.  I make referenced to the term “original” because budgets can be amended when more money is placed into the budget, which is still spending more than originally budgeted. Looking at the Coles County Audits you can see by simply comparing Original Budget to Actual and the difference being either over or under budget.

Realizing that the 2006 budget was probably set by the previous Sheriff we won’t include that in the results. He referenced a balanced budget 6 out of 7 years.

How is it that people can look you in the eye and make a statement that is completely false and not bat an eye?  Are we seeing yet another politician who says whatever he needs to say to get your vote in hopes no one will check up on his statements?

Even looking at his own published 2012 annual report we can see massive discrepancies in what he tells the public directly versus what the auditor’s report.

Looking at his claim of $5,571 .97 surplus on page 3 one can only assume he either didn’t read the financial numbers on page 4 because that number reflects $853.01 surplus or he just throws numbers together hoping no one will check it.  Granted, its a surplus but if this is the best this guy can do with numbers right in front of him, isn’t that a sign that he has absolutely no business trying to manage billions of your tax dollars in Springfield?

Even more bizarre from this guy is his comment used when he introduces himself.  He states: “I got in this race because I felt like we needed a representative from the District to represent us in Springfield”.

Anyone running in this race is from the District because you can’t run in the 110th District if you’re not from the district.

Would you vote for a candidate that had no problem giving up discipline records on certain deputies but refuses to give up his own?  Stay tuned for that one as its a whopper!

From part of a file that the State’s Attorney approved release of:

“Darrel liked to be “One of the Boys” too much. This interfered with his capacity as Sgt. at times. Low Output. Capacity to be excellent officer but does not apply himself enough.”

Stay tuned for more exposure to include everything from, illegal gun sales to Conflicts of Interest as this guy pays no attention to the law and the documents prove it. 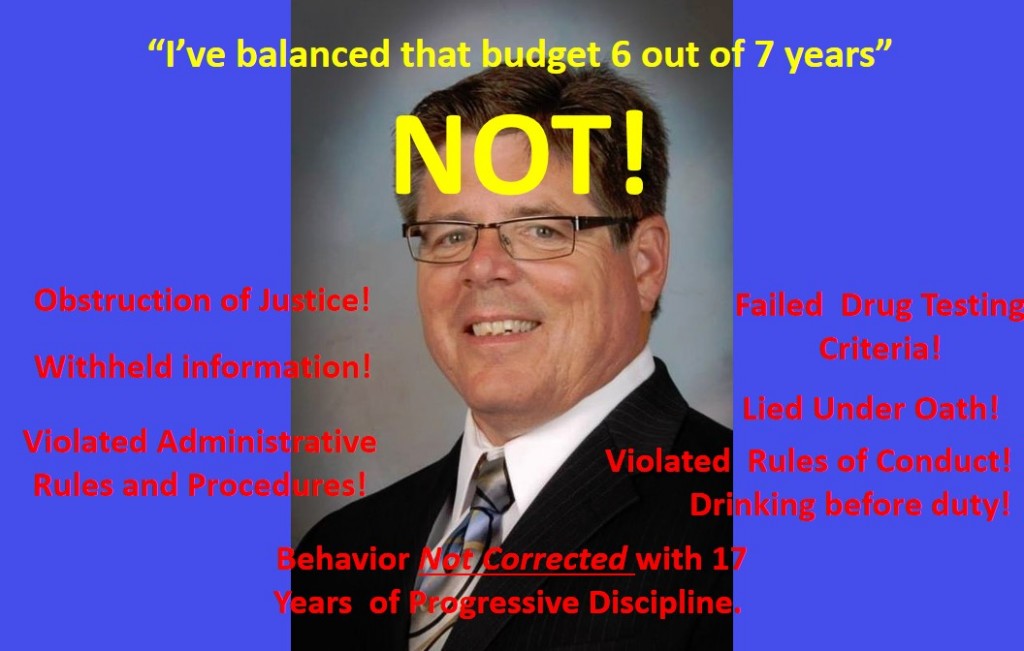