Give Them Enough Rope…

Resigned Because of Continuous Badgering

We just received documents answering a Freedom Of Information Act (“FOIA”) request to the county clerk.  Within these documents is the revelation that Chris Patrick “resigned because of continuous badgering by a group calling themselves ‘Edgar County Watchdogs’“.

I guess in his eyes it could be considered ‘badgering’, but we were simply stating truths about the FACT he had a conflict of interest. It certainly didn’t help our efforts of exposing that truth when the State’s Attorney stated in an open public meeting that “I certainly wouldn’t file any charges on that“. How’s that for a green light to break the law! Thanks Mark.

We quoted rules, statutes, case law, and everything else in between – everyone stayed silent, most knowing it was true.

Birds Of A  Feather…

Enter Bob Colvin and Francis Associates…it looks like Chris took a packet from the Kansas IKE Project into Francis Associates and talked to one of Bob’s employees asking her to contact DCEO, Department of Commerce and Economic Opportunity, to get a determination that since he was “only a material supplier” to the Kansas project, that it was not a conflict of interest.

Well well well, contrary to some close minded emotional thinkers in this county, turns out again that we were spot on with our assessment of the contract language and now, at the very request of Chris Patrick, the state points to the very same paragraph in the contract we did!

I reviewed your e-mail below and Bid Docs #139(2) that you reference below.  Number 139(2) applies not only to grantees but also to its designees and agents.  Unfortunately since Edgar County is bidding out the projects for the City of Kansas and is contracting for the work under the grant my opinion is that #139(2) would apply to Mr. Patrick since he served on the Edgar County Board of Supervisors within the past year.

Please let me know if you would like to discuss further.

Paragraph #139 (2) states: No member, officer, or employee of the Grantee, or its designee or agents, no member of the governing body of the locality in which the Project is located, and no other public official of such locality or localities who exercises any functions or responsibilities in connection with the Project during his tenure or for one year thereafter, shall have any interest, direct or indirect, in any Contract or Subcontract, or the proceeds thereof, for work to be performed under this Contract.  The Contractor will include the provisions of paragraphs (1) and (2) in every Subcontract so that such provisions will be binding upon each Subcontractor.

So now it looks like it’s high time for Mark Isaf to do his job and enforce the law because Chris Patrick participated in the Metcalf IKE project in direct violation of not only the contract as confirmed by the State Officials, but also in violation of the Public Officers Prohibited Acts statute that we have reference for over a year.  Failure to do so should be considered a willful failure to perform his mandatory duties as the State’s Attorney. It would be nice to see him do the right thing and place this in the hands of a special prosecutor.

The self dealing in this community is going to be exposed and it must be stopped!

the City of Paris is in and where the money went! 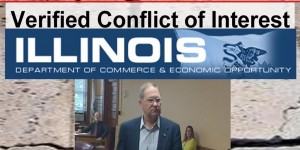