Heltsley Votes “NO” on Deputy Raises in a Political Move…

Election Season has started for some Edgar County officials, take Mike Heltsley's comments during the September county board meeting as an example. In what appears to be a purely political move in a failed attempt at casting the current Sheriff, Ed Motley, in bad light with his Deputies, Heltsley attempted to pursuade other board members to vote down the proposed pay raise for the Deputies.

Heltsley - the only "NO" vote

By attempting to place the blame squarely on Motley's head, Heltsley's failed attempt resulted in him being the only county board member to vote "NO" on the raise. Before the vote, he claimed current lawsuits could put the county in a financial bind, and those suits dealt with the Sheriff and his suit with Burgin and Hopper. He failed to mention the other suits the county is involved in, but nevertheless, it was an attempt at upsetting our hard working deputies, trying to make the sheriff the reason, and trying to force the sheriff to put Burgin and Hopper back on the department. Heltsey's comments proved beyond a doubt that he has an axe to grind and there is no level too low for him to go.

Keep in mind this had absolutely nothing to do with whether or not the deputies were deserving of a raise, it was a childish move by Heltsey, putting the livelyhood and financial well-being of county employees below his own self-serving purpose just prior to an election. He threw them under the bus for personal reasons.

The remainder of the board did what was right, they voted in favor of the pay raise for our deputies.

Mike Heltsey was the only board member with a "NO" vote. Mike, you are a failure!

Here is his phone number (unless he changed it) if you would like to call to express your "gratitude" for his vote... 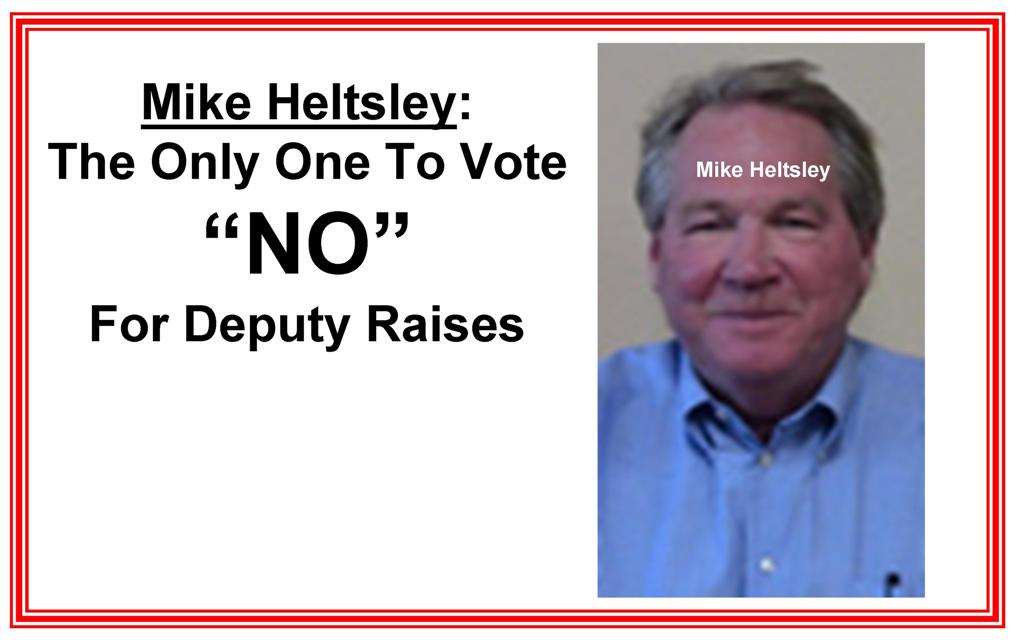