One of the first items we asked for in our FOIAs, back in March of 2013,  to the Ford-Iroquois County Health department was a copy of the personel policy, ethics rules or any other rules and regulations approved by the Public Health Board or Administrator.  (See Item #11)

Julie Clark claimed it was too burdensome and required us to narrow our request.

A policy manual is an item that should be give to anyone that steps through the door asking for it!  Why would they not want to give up such a document?  We knew things stunk, but had no idea how bad until we got our hands on this document today!

No officer, employee, or his/her partner, immediate family or agent of this agency will participate in the selection, awarding or administration of a contract, if a conflict of interest, real or apparent, would be involved.  Such a conflict would arise if the officer, employee, agent or an organization which employs, or
is about to employ, any of these persons has a financial or other interest in the firm selected for the award.  To the extent permissible under state or local laws, rules, and regulations, such standards shall provide for  appropriate penalties, sanctions, or other disciplinary actions to be applied for violations of such code of standards of conduct.

Official Misconduct is the penalty that Mr. Devine should charge them with!

Julie Clark VIOLATED the policy manual and both the Financial Coordinator, Cary Hagen, and the Administrator, Doug Corbett, knew it because it was those two that review the policy once a year!

Julie Clark and her husband were awarded the no bid contract for the solar panel sale and that action is in direct violation of the very policy in place for the FIPHD, not to mention state law!

More disturbing, if that’s possible, is the fact that Doug Corbett claimed he didn’t know it had to go out for bid after this corrupt scam was exposed.  That would be yet another lie from Mr. Corbett because the policy manual specifically spells out his obligations and points directly to him as the one responsible for putting such a purchase out for bid.

Don’t take my word for it. Read the policy yourself!

If the estimated cost of the purchase is in excess of $3000 the public health administrator will solicit sealed bids by public advertisement in at least two local newspapers. The advertisement will clearly define the terms of service needed, will allow two weeks to submit bids and establish a date and time at the health department for bids to be opened publicly.

I specifically requested the notice provided for the opening of any bids, and they told me they didn’t have any records for that.  So yet again, more peeling of the onion confirms it still stinks!

You may recall we asked for signed economic disclosure statements from Julie Clark and she created an elaborate story about how she filed one in the county where she lives but didn’t think she needed to in Iroquois county.  That would be a lie based on THIS DOCUMENT!

The Public Health Administrator, Board of Health members, and members of the administrative management team are required to sign an annual disclosure of potential conflicts of interest as mandated by Public Act 88-605 (SB-1364) an amendment to the Illinois Governmental Ethics Act. See attached  Statement(s) of Economic Interest.

We are all smart enough to know that her company selling solar panels to her employer (FIPHD) is a conflict of interest, but these people actually think you are all so stupid you will never notice.  At every turn we are finding more and more violations of their own policy manual, to include Cary Hagen receiving Jewelry in direct violation of the longevity policy!

Stay tuned for more exposure of criminal activity as it relates to the Public Health Administrator and theft of funds! 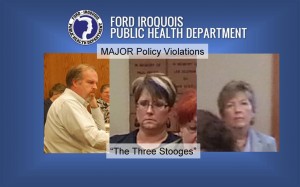