The township responded (bottom of page or click here to read it now) to the AG's inquiry, 2013 PAC 25511, into whether documents were improperly withheld. In a previous article, we pointed out the fact that the Twp had failed to provide documents persuant to FOIA request. Their response to the AG is quite telling.

"No Documents For Vacation Days"

The first item is to deny there is any record of vaction days taken. Do you know of any employer that does not document vacation days? This denial comes after they claimed I asked a question instead of requesting records. If there are no records pertaining to the request, why would they continue to insist that I asked a question? They basically now claim the only record would be a mental record of the supervisor when he approved it, otherwise there are none. With that said, I would consider it also an acknowledgment that they do not know when employees were at work either.

"No Requirement To Answer Questions"

The Twp states there is no requirement to answer questions, and then state their position is that there has been no request to review records. The fact that they have an email entitled "FOIA Request", with the first line ending in "I request the following" is too easily confusing. Did you spot a question in there? I didn't, but the Twp did, and have been using that as an excuse to withhold public records.

The fact remains: There were no questions asked, only a request for documents.

Twp continually evaded the question of why they did not provide a copy of the requested credit card receipts. They did provide a copy of the CC statement, but no receipts. I know that it must be hard sometimes to distinguish between a "statement" and a "receipt", but the twp apparently cannot tell the difference. You might ask why we need receipts, and the answer is to determine what was purchased with public funds...whether it be food, drink, lottery tickets, or gas for a Harley Davidson while on a four-state vacation...we have that RIGHT to know what was purchased, by whom, and what is was used for.

Fianlly, they make feeble attempts at discrediting the FOIA requestor. First by claiming incomplete information was provided to the AG's Office, then whining about the lawsuit, then claiming I didn't pay for a previous request, then claiming I haven't paid for more recent requests.

Claims of Incomplete Information provided to the AG: This claim is made by the Twp, in that I did not provide a letter written by Mr. Petty on Aug 1st. How could I provide that letter if I did not receive it until the day after I filed the request for review? That was easy to show it had no merit.

Whining about the lawsuit: The lawsuit is not applicable to this AG complaint. They involve two seperate and distinct records requests. By bringing this into the mix, the twp has shown a track record of FOIA noncompliance.

Payment for previous requests: I do not pay for improper invoices. I recalculated what was sent, then provided payment for the proper amount, the twp refused the payment.

Haven't paid for more recent requests: No invoices have been provided claiming anything owed...and there won't be any, simply because each recent request involved less than 50 pages of public records.

They did blabber on and on about how one request was mixed up with another request, and she thought she replied but didn't, then thought it was a repeat request and it wasn't, then blabbered on for a few more sentences. The bottom line here, is if the FOIA officer cannot read, they need replaced.

My Response To The AG's Office

After reading the lengthy response from Arcola Township, where a great majority of it was not applicable to this Request for Review (RfR), I feel I must reply all of the Arcola statements, if nothing more than to set the record straight. I will attempt to reply to each paragraph.

Sec. 3. (a) Each public body shall make available to any person for inspection or copying all public records, except as otherwise provided in Section 7 of this Act. Notwithstanding any other law, a public body may not grant to any person or entity, whether by contract, license, or otherwise, the exclusive right to access and disseminate any public record as defined in this Act.

By not providing the dates and names of employees that took vacation days during a certain time-frame because of “oral permission” from the supervisor, I submit that it effectively gives the supervisor exclusive access to the public record requested. One could argue that mental knowledge is public record as defined by Section 2(c) of the FOIA, and it states in part (emphasis mine):

and all other documentary materials pertaining to the transaction of public business, regardless of physical form or characteristics, having been prepared by or for, or having been or being used by, received by, in the possession of, or under the control of any public body.

Vacation days, if they are paid vacation days or the employee is a salaried employee, are public record as defined in Section 2.5 (Records of funds), as paid vacation days are records related to the obligation, receipt, and use of public funds. The Township in this instance would be obligated to pay the vacation days, and the funds paid for said vacations would have been used for other than normal working wages. What is to stop someone from accruing extra days through the years if nobody knows what days were already used?

Whether or not the Township is currently subject to a lawsuit, on a matter irrelevant to this RfR, should be of no concern to this review. The records requested in this particular FOIA request are not the same records subject to the lawsuit.

Again, the Township’s position is that I did not request to “review” a public record, and they could be correct in that statement depending on how detailed they want to get with words. I did, however, request a “copy” of certain public records, with the vacation days being only part of this request. They have still not provided receipts for certain listed credit card purchases.

ArcolaTownship’s attempt at discrediting me, by stating I gave the PAC an incomplete view of the situation is false. At the time I sent this RfR to the PAC (August 1, 2013), I had not received their August 1, 2013 letter, sent via the United States Postal Service. Therefore it would have been impossible to include a copy of something I had not yet received. Also, if no such records existed pursuant to the particular records requested, they are obligated to respond as such.

The Township says they “also” replied to a request sent on July 21st.

-          The request in question is dated July 21st, in which I also asked for certain credit card receipts.

-          What I asked for in April is irrelevant to this RfR and nothing in this RfR seeks copies of the same records subject to the lawsuit.

On the township’s final paragraph:

-          The Township once again attempts to discredit me by claiming that I “never did pay for any previous requests, and haven’t paid for any of the recent requests either”.

-          The issue with any requests, except for the July 21, 2013 request, are irrelevant to this RfR. However, I cannot allow ArcolaTownship and Mr. Mark T. Petty, a licensed Attorney in Illinois, to twist things around in an attempt at discrediting me instead of stating facts.

-          What the township stated about me not paying for previous requests is a pretty telling statement. Since the billed amount was inconsistent with 5 ILCS 140/6, I simply calculated the amount pursuant to section 6(d) and sent a check for that correct amount.

-          The timing of the payment has nothing to do with this RfR, and since it was inconsistent with section 6, they should feel lucky I even attempted to pay anything.

-          The Township has not sent a bill for any other FOIA request I have submitted, so their statement that “and haven’t paid for any of the recent requests either” is nothing more than an attempt at discrediting me. While the statement may be true on it’s face, I cannot pay something that was never billed.

-          No additional requests have asked for the same records involved in the lawsuit. I don’t know why that statement was included, except that maybe they are trying to lead you to believe something that is not true.

Finally, the fact still remains that the township:

Thanks for your consideration, 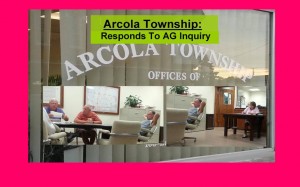