During the Ford County Board meeting last Monday, the Chairman asked for FIPHD Board member Teddy Jenson, aka Preacher Man, to share what he has learned about all the issues taking place at the health department.  The most recent document supported articles are here, here, and here.  More can be found with a simple search on our site but I warn you, get a cup of coffee and a soft chair as there is a lot to read.

Ford County Board members continue to claim they have not seen any evidence of wrong doing, so I guess they thought they were going to see something from Preacher Man’s presentation.

I spent a whopping 4 minutes and found factual proof that an Illinois based health department cannot operate in Indiana.  For the Ford County Board members that can’t get answers from the Preacher Man, read these short statutes from Indiana, and then see if you accept the BS spewing from these people’s mouths : 1, 2,3,   Primary link here.

Even though the Chairman wanted facts from Preacher Man and not personal opinions, it was pretty clear that didn’t happen.  In fact even the Chairman saw how off point the speech was and directed him to get back on the topic at hand.

We can’t allow a public official to stand there and makes up things in a conversation, which is exactly what this guy did, and the paper trail proves it!  Since the Ford County Board wanted evidence of any wrong doing, what they heard that night should have been enough but only if they are smart enough to break down the wordsmithing by Mr. Jenson.  His own words prove that he too should be removed!

A couple of “facts” of the abuse being distributed by Mr. Corbett in the work place that the Preacher Man failed to present to the board we included in this short article.  It would have been in the video response but we didn’t have it in our hands until after we created the video response.

What would you think if your boss handed only you this document at the work place?  It’s appalling enough, that I think anyone in any profession would insist Mr. Corbett be fired for such actions.  As if misleading the public of his credentials is not enough.

The other document is the Smoking Grant as it relates to fraud.  Their own documents reported to the state reflect a list of employees working on the project. Claiming a person is working on that project and allotting a certain amount of that grant money to go towards their salary, when in fact that didn’t happen, is fraud.  That same document shows none other than Julie Clark as the Contractor, of which this response to my FOIA shows they have no contract for that project, which is not what they told the state and yet again, no bid notice for the contract they gave Julie Clark.

Mr. Nuss, since you won’t tell the public your connection to the FIPHD, we will.  It is our understanding from multiple sources that your nephew’s fiance works at the FIPHD and is quite close to Cary Hagen.

Get your coffee and prepare yourself!  Plastic see-through cover over the computer screen and key board may be necessary!  Enjoy!

Indiana Code – YOU CANT DO IT!  Now that was hard to find!

Powers and Duties of Health Board – Read item 12!

Jenson e-mail regarding family member arrest to be used as a way to influence. 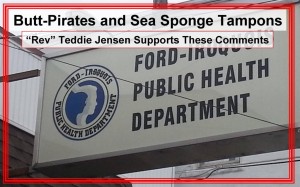