Ford County – What does it take?

Going through all the e-mails that have been provided through multiple sources, it appears, to no surprise, Mr. Ted Jensen has no concept of what the law is, let alone when he is or is not breaking it.

“I would not want to do anything that is breaking the law.”

Mr. Jensen, I don’t think anyone “wants” to break the law, but the problem appears to be no one wants to read the law and even attempt to understand it so they therefore end up breaking it.

However, when a person has complied with the OMA training and has the certificate, they can no longer claim they didn’t know!  You sir, have again with this email, violated the OMA statute.

You are discussing public business with a majority of a quorum, which makes this communication a public meeting subject to the OMA statute.   What raises even more concern is how the communication is selective, which points to an effort to have what is commonly called a secret meeting.  You know, one that only those you want to know about it are involved.  Convenient how your e-mails are void of any inclusion of Iroquois County members.

“There is a lot of difference in saying that the AG will not pursue any charges and that there wasn’t anything that they could charge the department for in regard to the evidence that they were shown.”

Mr. Jensen, that portion of the e-mail is very important, and it’s sad that you didn’t take the time to pick up the phone and get a direct answer from your legal counsel, which doesn’t cost you a dime thanks to the Watchdogs exposure of the illegal hiring of your previous attorney.  You know, the one referenced in this article.

Mr. Devine confirmed our information provided regarding who he is to represent and acted on it.  However I understand why you may not have contacted him.  The very FIPHD that allowed the Solar Panel Purchase to take place in the fashion it did, is just as guilty as Mr. Corbett and Julie Clark as you people approved it.

The duty of each State’s attorney shall be: (7)To give his opinion, without fee or reward, to any county officer in his county, upon any question or law relating to any criminal or other matter, in which the people or the county may be concerned.

I could go on for hours with the volumes of illegal acts we have uncovered. but it appears you people would rather focus on the messenger than the message.  The other telling issue is the fact a clear, one sided, orchestrated cover, is being provided for Mr. Corbett.  Telling, because it’s clear when one county saw the evidence they took action to fix the problem.  That is all anyone is asking for.

In fact, not a single person from the Ford County Board or Ford County Health Department board members have contacted us with a single question.  Those from Iroquois who did contact us got the truth with documents to support it so they could make a decision based on knowledge!

We have talked with the AG office on dozens of matters and more often than not, the crimes presented to them, “they” do not pursue unless the crime involves two factors, sadly, political pull or theft of a substantial dollar figures.  Any time we see them involved on a low dollar figure crime it had ties to political connections.  That is wrong. It frustrating but it is what it is.

It’s for those very types of issues we formed this organization.

People stand up before public meetings and cite the Pledge of Allegiance which ends with “and Justice For All”, then they go right on about their business and refuse to uphold any justice, let alone for all.

I believe when public officials refuse to even allow the truth to be exposed in a public meeting they are in direct violation of their oath of office, assuming they even complied with that requirement of taking the oath!

Ted Jensen states: “Given the attitude in Iroquois County, It is my opinion that wordsmithing might have been done as I do not think that the Health Department did anything that was illegal.”

Nothing to support the opinion Mr. Jensen, but please know, I respect your right to your opinion and have served my country to protect that right, for you and many others.   What is infuriating to most people though is people sharing there opinion when they have no foundation to support it, other than their personal feelings.

You state that you don’t think the Health Department did anything that was illegal.  I would agree that the  Health “Department” may not have done anything illegal, but the evidence sure supports that Mr. Corbett has, as well as Julie Clark and Cary Hagen, and not to beat a dead horse, but you Mr. Jensen, with the very email discussions you are having in violation of OMA.

I welcome the attacks after each and every article but you people need to know, when you restrict the public’s right to address our government to 5 minutes there is no way to share all the evidence we have to prove everything we report on.

All indications are now more focused on the severity of the illegal acts, versus if there were any.  Holding our local officials accountable is an obligation we have as a citizen and when those officials refuse to even allow a presentation of the fact, We The People are forced to expose it in the very format that we have here at the Edgar County Watchdogs.   Unrestricted access to the documents with links to the statutes for all to read.

Mr. Jensen, and to the rest of the board, if I provide you documented PROOF that Mr. Corbett has misrepresented the truth in obtaining state Grant Money, more commonly referred to as fraud, what would you do about it?

When I expose the truth about the insider dealings with flood money being used on certain employees and their families, what are you going to do about it?

When Mr. Corbett refuses to turn over public records, even after legal counsel informed him it’s a requirement, what are you going to do about it?

I challenge the FIPHD Board members, as well as the County Board members of both Ford and Iroquois to place me on their agenda for a question and answer discussion to fully expose what our team of investigators have uncovered.

If we are all wet then it should make front page news and I get to be the laughing stock of journalism.  However, if we are correct then the real question becomes what are you going to do about it?

For the Good People of Ford and Iroquois Counties, please know we are going to do our best over the next week or so to get everything published that we have uncovered.  It will contain some very disturbing documents that paint the picture quite well of what is really going on with a few select public officials, and their ties to self serving agendas.   Those documents will create local issues because there is nothing harder than to except the fact your friend or neighbor has been lying to you and others.  Just ask the good people of Dixon, Illinois! 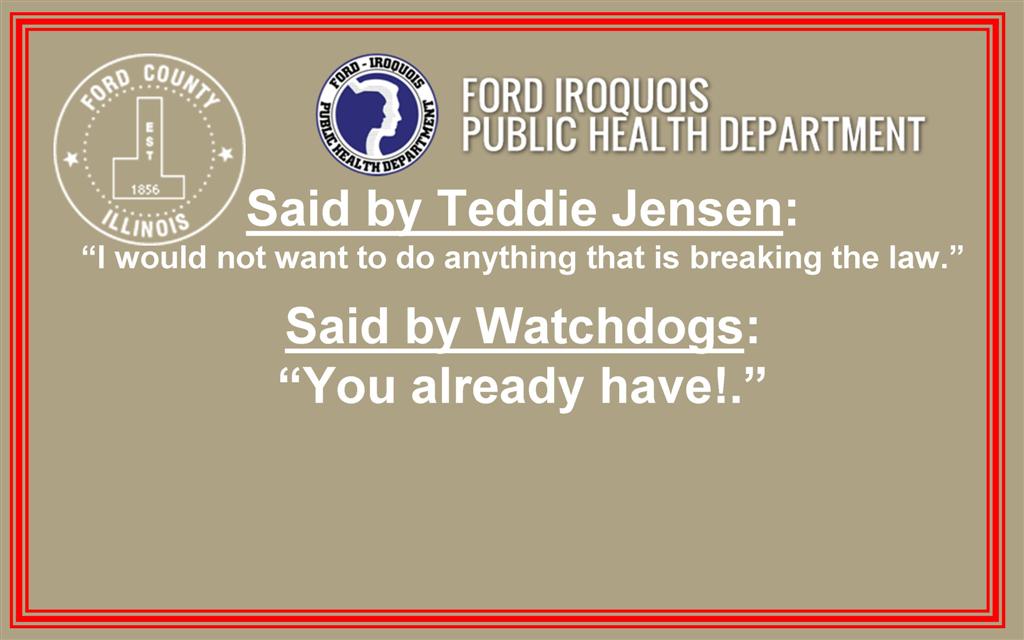