From all appearances, free driveways are “how we’ve always done it”! Our thanks to a tip from a concerned citizen, this issue has finally had some light shown on it in Effingham County!

The good citizens of West Township in Effingham County had to foot the bill for private drives being oil and chipped on the public dime. How nice of them to pay their taxes so their neighbors could get these free driveways.

If you have been reading our website for awhile, you might remember the same issues being reported from Edgar County (Here, Here, and the 2 coats Chris Patrick received from Symmes Township). Those investigations by IDOT have been ongoing since June of 2012 and are in the final draft of the official findings stage. The final report should be out to the public in a month or two.

Back to West Township in Effingham County – and probably in most other townships in the state:

Jason xxxxx
xxxx E. xxxth Ave
Mason, IL  62443
and
Michael xxxxx
xxxx E. xxxth Ave
Mason, IL  62443
(Exact name and address withheld for the time being)
Township personnel have stated that they cannot produce a copy of any invoices, nor the checks for payments on these drives. But don’t worry, by the time IDOT finishes with this, they will have to pay not only for the material, but for the labor and equipment usage as well.
During the February 11, 2013 meeting it was learned there were two private drives that were oiled in 2012 that the Township had not received payment for (makes me wonder how many driveways they did that did pay for the material) – payment or not it is a violation of the law and an improper use of public funds, personnel, and equipment.
At the time (Feb 11) , the Road Commissioner gave a “dog ate the home work story” of his computer crashed and almost could not remember how much the bill was for the oiling of two private driveways.  He said maybe $3000.00.
At the March 11, 2013 meeting the Township supervisor, Scott Beal, was asked if he had the check (checks) for the two private driveways that were oiled in 2012.  His answer: NO.
The Effingham County Highway Department did the oiling and West Township trucks were used for the rock (chat).
We have since learned there are other private driveways that were oiled in previous years, but not sure if the Township received payment.
More updates as information becomes available. 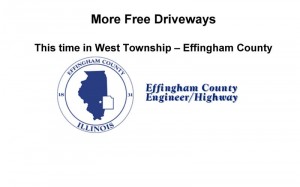