The Beacon News published an article late November of last year proclaiming that the City of Paris saved $90,000 on insurance compared to last year! Wow! What a deal!…Or was it…?

I have been around long enough to know that insurance rates don’t just magically decrease from year to year, especially given the current state of affairs our country is in. UNLESS some outside influence (called competition) suddenly shows its head.

Early last fall, the City of Paris, issued a call for insurance bids for the upcoming year for the city. The FOIA officer denied there was such a request for bids, but the Mayor confirms there was (in the video) . There was also submission deadline to meet in order for bids to be considered for the contract. That deadline was November 9, 2012 – I will do a quick run-down on the timeline as we know it to be:

Some very interesting comments from the Mayor considering the facts involved.

According to Anderson, the very person that the Mayor gave all the praise to for “getting the bids”, they didn’t put it out for bid.  (See Email) In that email, she says Dimond Bros “solicited bids from other companies” – No way to lose out on that deal is there?

Does anyone recall the cover of the local paper the next day?  A praising write up on getting the best deal on the insurance.   So can anyone come up with an answer as to why she would claim it never went out for bid?

What Mayor Smith FAILS to tell the public is that the Dimond Brothers bid they accepted came in 3 days after the close of the bidding deadline and was $27,991.00 less than the first losing bid Dimond Bothers submitted 3 days before the bid closing.

Most Insurance Brokerage firms have STRICT procedures for how they are compensated by their clients.  There are two ways to get compensated directly by their customers.

– The first and most common way is that the broker can take commission which is usually a percentage of the premium and ranges from 5%-20% depending on the insurance company, type of coverage, etc.

Absent a written agreement between the City of Paris and Dimond Brothers, the combination of being compensated by a Fee and Commission is highly questionable, would not be tolerated in most reputable insurance brokerage firms, and should not be tolerated with the citizens of Paris.

Was Dimond Bros accepting commission and a Brokerage fee? Did the city know, and condone it?

Did Dimond Bros disclose the fee and commission?

How is it that a bid that came in after the deadline was accepted?

Who told Dimond Bros they were underbid (which led to the late bid submission)?

Why did the city council allow Dimond Bros to submit a late bid, conveniently under the current low bid?

Was the city council using the “Heltsley Rule”? – showing all the bids to the local guy so they can “keep it local”? Is that ethical? Legal?

Why wasn’t the bid awarded to the low bidder as of the end of the bidding deadline?

Does that fact that Mr. Bartos, with Dimond Bothers, is holding a ~ $300K revolving loan obligation to the City of Paris factor in?

Was the City of Paris paying $90,000 more than it should have for the past several years? WHY? 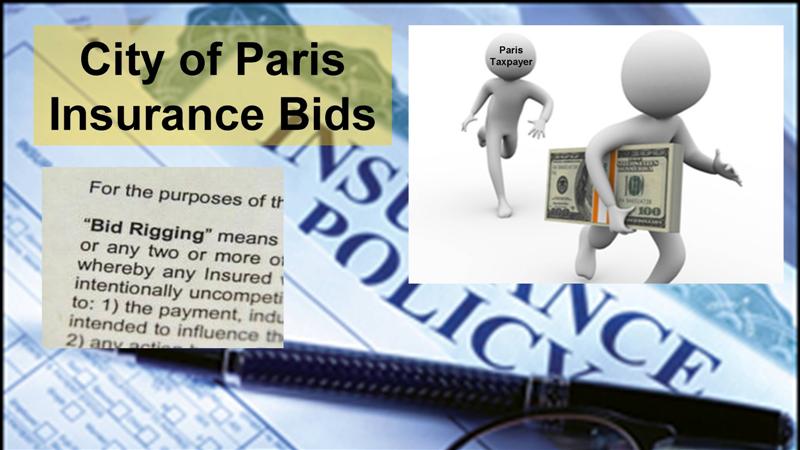