One of the most basic rules of Public Meetings is the fact that secret ballots are not authorized and are a violation of the Open Meetings Act.

The Illinois Appellate Court has ruled that votes by secret ballot violate the requirements of and the policy underlying the Open Meetings Act. Specifically, in WSDR, Inc. v. Ogle County, 100 Ill. App. 3d 1008 ( 2d Dist. 1981), the court ruled that a county board’ s vote by secret ballot to elect the county board chair was improper and stated that the public interest would be served by disclosure of the individual board members’ votes on the question. Thus, the Board violated OMA at its December 5, 2011, meeting when it voted by secret ballot to elect its new Board chair. However, because the Board has remedied that OMA violation by re- voting in the open to elect the chair, we require no further action from the Board.

So the “Airport Advisory Board,” if that is what they are, since nobody on the board knows which statute the airport operates under (not even the former 25 year board member Chris “Mr. Character” Patrick  knows), decided it was a good idea to hold a secret ballot (14:40 mark in the video) to nominate a new member to a vacant board seat. An Open Meetings Act complaint alleging this violation has already been filed with the Illinois Attorney General’s Office.

Who did they nominate? None other than Adonna Bennet, a former county board member.

Why is this important? Because apparently (as reported to us) she has been actively “campaigning” against RSB Aviation and attempting to damage their reputation. You would think the current board members would at least attempt to nominate a neutral party in relation to the events of the past couple of months. I wonder what her “special fitness for such office” will be determined to be.

Actually, YES, we do! Identifying the statute which the airport operates under should be the first and most basic thing any airport board, advisory or not, or any county board could do. Reasons are many…for instance: the statute determines the make-up of the board, determines the selection process of new board members, determines the powers and duties of the board, and determines which public body receives the rent monies, what must be done with donated property or monies, etc…

Here are a couple examples:

“…the county board shall proceed to elect a County Airport Commission, composed of five voters of such county, two of whom shall be members of such county board, hereinafter called County Board members, and three of whom shall be persons who hold no elective or appointive political office, hereinafter called Non-County Board Members. At least one of such Non-County Board members shall be licensed air pilot or a former member of one of the branches of the Armed Services of the United States who has had equivalent training and experience. All members shall be chosen with reference to their special fitness for such office. The member chosen for aviation experience shall be known as an “Aviation” member, and the other Non-County Board members shall be known as “Non-Aviation” members nothing herein shall prevent the appointment of more than one member of the commission meeting the qualifications of an “aviation” member.”

Other items from this meeting include some “confusion” as to the exact wording from the county board’s special meeting. There was still some lingering doubt, probably instigated by someone not present at this meeting, whether or not a new business lease agreement was supposed to be for RSB or for anyone wanting to relocate.

The motion at that meeting is pretty clear (watch the video), so what is the confusion?:

“To formulate a new business lease agreement between the County, the Airport Board, and RSB Aviation for the use of the Edgar County Airport facilities. The lease should be fair to both parties and be finanlized by regular March (2013) Board Meeting.”

With that being said, I think the airport board now knows what the motion’s intent was. 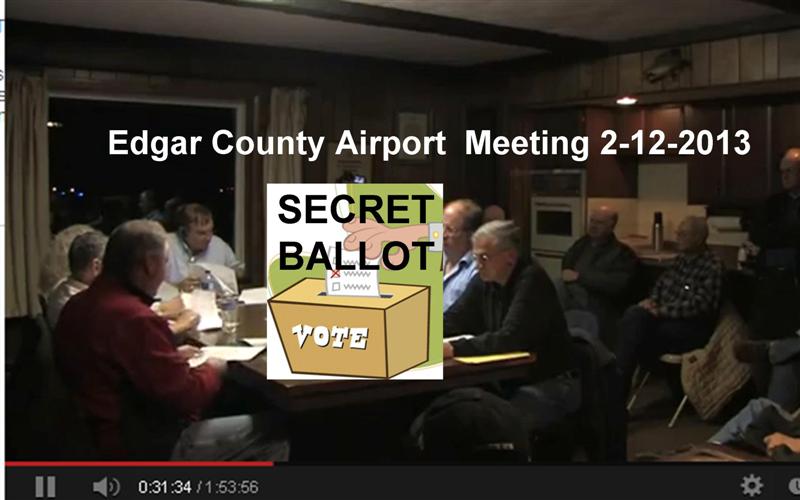