The CERWD has the right and obligation to provide records as to who lives in the Annexed District of the water district, however, anything else, such as comparing signatures to billing documents and deposit checks to speculate on their validity is beyond their obligation and is a clear misuse of taxpayer resources and time. They were doing work to rehabilitate challenged and flawed petitions to the benefit of candidates whom either they circulated petitions for, or are employed by, specifically the current Board Chairman and Candidate for the office in question who circulated petitions for David Sprigg.

When questioned, the attorney for Sprigg first denied asking the district to create this document, then after further questioning, verbally acknowledged it was in fact him that asked for the assistance which produced the document in question.  The production of the document was no small feat, and I’m sure it took many hours to accomplish.

First of all, you have to ask yourself what being served with a subpoena has to do with comparing signatures with contracts and payment checks. A subpoena is nothing more than a demand to appear at a specific time and place to answer any potential questions.  There was no document demand included in the subpoena!

On the document itself, signed and sworn to “The information in this document is said to be true and correct to the best of our knowledge.” Signed by Kevin Conover, Lisa Rigdon, and Notorized by Jennifer Gher. The very first statement on the document appears to contradict the other two excuses for its creation:

“On January 18, 2013 the CERWD office was contacted and asked for our assistance of clarifying the accusations of the Objector’s Petition of Kirk Allen and John Kraft to the Nominating Petitions of David Sprigg and Gerald Meeks.”

So, they first, in a written document, acknowledge they produced the document after they were “contacted” and asked to “assist” (taking care not to mention a name). It is clear that in subsequent communications with them that they were not entirely truthful with their later statements.

When you look at all of this in a package, it’s no wonder we see the vast amount of corruption and disregard for the law coming out of Edgar County.  Clearly no one is reading it because no one is going to enforce it!

I think most would agree however that these events are of such a egregious nature they must be held accountable.  Our Election process was tainted with corruption and clear violations of laws.

Have we forgotten the most recent election law violations right here in Paris Illinois?  The situation with Carolyn Brown Hodge, former top aid to Gov. Quin, who left her $119,158.00 a year job amid the illegal acts uncovered by the governments probe into whether she had done political work on state time?

She resigned and was fined $1,000.00 for campaigning on the states dime. Many have echoed, it was only e-mails she sent, however the point is, it violates the election code as well as state ethics guidelines.

I will say what sets her apart from the people at the water district, who have basically done far worse, Ms. Hodge did the “right” thing by resigning and even stated,  “I will take my medicine like everybody else should.”

That is the type of response most of us were raised with.  When you screw up you apologize and correct the wrong by never doing it again.  From there we move on and build a better society.  It’s called doing the right thing!

I think that is what most would expect in these situations however the attitude with many of the folks in question in this county is to refuse they ever did any thing wrong, and then try to manipulate or cover up the very things we are exposing.  That makes it even worse and if we continue to ignore it our society pays the price across the board.

Employees of the Clark Edgar Water District have in fact assisted candidates for election to the very public body they work for and did so on the tax payers dime!  That is a violation of numerous statutes and they should at a minimum resign for their actions.

Election laws exist to preserve the integrity of our government. (Glenn v. Radden (1984), however ignorance and/or disregard for those very election laws does just the opposite! 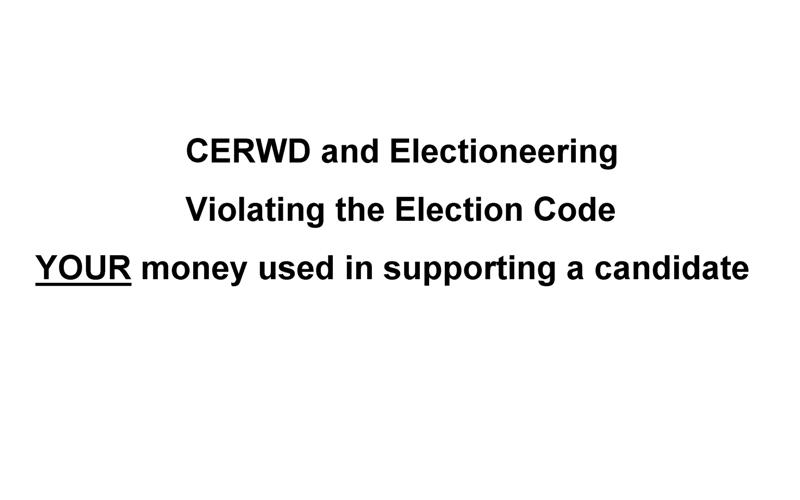