It has been echoed by Mr. Chris “Character” Patrick as well as most recently, County Board member Mike Heltsley that the Airport Board is an Advisory Board, that votes on things and according to Mr. Character, those votes represent what is suggested to the County Board for their approval and final vote.

So one must ask, what do you call it when the facts are not supported by the words coming out of a person’s mouth?  I call it a lie but many say that is not politically correct.  Guess what?  I don’t give a rat’s about political correctness anymore, nor should you.  We are all tired of the games being played by a select few who clearly can’t tell the truth.

Applying Mr. Characters claim that the Airport Board is only an Advisory board and that only “Advisory” action is taken proved rather……conflicting, at best!

A quick review of the Airport Minutes from 2008 to current shows quite a history of actions taken and we thought it best to highlight a few of those for the public. (Note that the date at the top of the pages represents the preceding month of the minutes.)

Lisa Gill will replace Paula Huffman – No notice in the papers or opportunity for citizens to apply for the position.  Action clearly taken with no board discussion or vote taken as a recommendation to the County Board.  Note that Jimmy “CD” Wells does not have the authority in his contract to hire people.  And for those just catching up with the drama Mr. Character is bringing to this town, it’s been claimed by many that Lisa Gill just happens to be Chris “Character’s” current partner, if that’s what you call it when you’re still married to someone else.  “Action taken with no County Board Approval!”

Here is the prized employee who regularly receives her personal business shipments at her place of employment (Airport), which is where this photo was taken.

Where did we get the photo?  From her personal Sales Spider link.  In the event she scrubs the information from that site I figured we should post a screen snap shot of it. 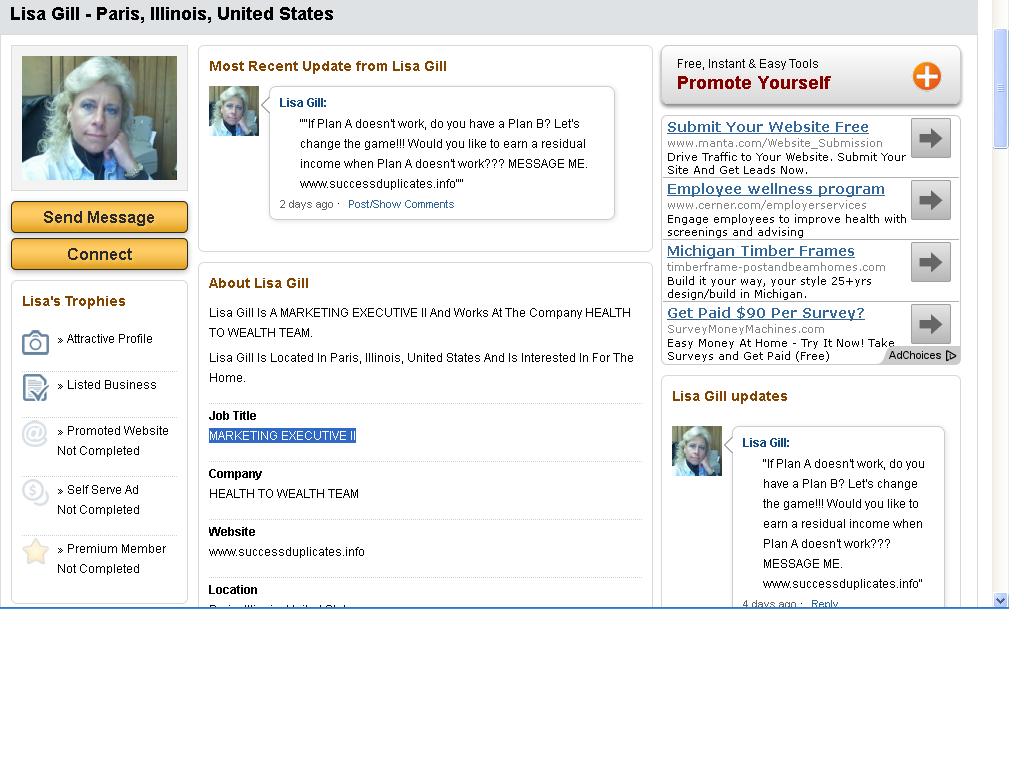 Take notice of the Website she lists in her self promotion!  It takes you to a HOME BASED Business venture!

Home Based Business promotion from her County Employment Office!

Discussion of pouring concrete for a memorial on the south side of the hanger. What do you suppose shows shortly thereafter? A payment to Zimmerly Ready Mix for $133.13 paid out of the Airport Capital Fund.  Interesting how there was no mention in the minutes that this is a Conflict of Interest and illegal for Mr. Patrick to do this.  Even more interesting is the fact they actually took action on this, yet nothing shows up in the County Board Minutes, so again, Action taken from what Chris Patrick claims is strictly an Advisory Board.  Even more interesting is the fact that over the next several years the minutes reflect discussion on the very same memorial being built.

In 2009 the following payments to Zimmerly are made, yet not a single mention of approval by ANY board yet the Airport clearly took action and received cement, or did they?  Mr. “CD” Wells now claims no knowledge of any Zimmerly cement being delivered.  Airport Capital Fund

Jimmy “CD” Wells reports to the board $2,000.00 has been spent on hanger doors.  Interesting that there was no mention in the minutes anywhere “Advising” the County Board this needs to be spent, nor any mention of approving this expenditure.  Couple those facts with the fact Mr. Wells contract limits his authority to $500.00 it’s safe to conclude, yet again, another example of action taken with no authority!

Mr. Character makes the motion for Mike Wilson Roofing to do the job!  Two months later the minutes report that Mike Wilson Roofing received the job? October 2009 Jimmy “CD” Wells reports the roofing job is complete!  Yet another example that this public body is a far cry from an “Advisory Board Only”, as clearly they took this action all on their own!  By the way, that bill was $15,386.00 and if you read the minutes, its clear it was Direct Action taken.  Hardly Advisory Mr. Character! (page 6 of 44)

None other than the Bob Colvin connection B&T Drainage pops up as  payment in the Airport Cap fund on page 7 of 44.  What is so odd with this one is I don’t see anything at all in the minutes, Advisory or otherwise authorizing B&T Drainage to be hired, do work, let alone be paid.

Southwest area of storage cleaned up and working on excavation for concrete.  Concrete?  Any guess what shows up after that? Numerous payments to Zimmerly Ready Mix with not one word mentioned in the minutes approving the purchase of concrete from Zimmerly Ready Mix. How convenient for Mr. Character!   More Action taken from what Mr. Character claims is strictly an Advisory Board.   Airport Capital fund

Discussion and approval to move ahead on land purchases of the Harper Property and the Patrick Property.  Note that Chris Patrick is in this meeting!  How is it that he can discuss and approve moving ahead with land purchase that includes his own property?  Fortunately for the tax payer, it appears from my source at IDOT Mr. Character couldn’t sell his ground because of the Conflict of Interest, however this is yet another example of Action Taken by the Airport Board.

Mr. Character takes action to place his name and Mr. “CD” Wells’ name on the CD that was gifted to the Airport.  Not only did they not get any approval from the County Board, to this day they have refused to disclose the information on this CD which is legally a county asset.  Again, more action from this Advisory Board under the control of Mr. Character.

Mr. “CD” Wells reports repairs to the snow plow are going to cost $5,000. What happens the very next month?  Mr. CD reports the repairs to the snow plow are done and it cost $5400.00.  NOWHERE did anyone ever approve this work according to the minutes.  So now not only does this secret boys club take action again contrary to their own words, they take action without even voting……..again!

Three bids received to tear down the Harper house and the board approves the lowest bid.  NOTHING was discussed during a County Board meeting on this so as we have been pointing out, more action taken from a board that Mr. Character insists is an “Advisory Board Only”.

Mr. CD Wells reports repairs to the tractor are going to cost $2500.00 and why wait another month to approve it when you can authorize the work right now?  Yes, another direct action taken with no county board input or approval.  I wonder how that “Advisory” only thing is working out for Mr. Character.

As everyone can clearly see, Mr. Chris “Character” Patrick has been in charge of an operation that to this day cant tell anyone what State Statute they operate under but also has a real problem with the truth.  With his leadership, or lack of in my opinion, the Airport Board has taken numerous actions with no approvals from the County Board, which proves Mr. Character lied with his claim they are an Advisory Only board! 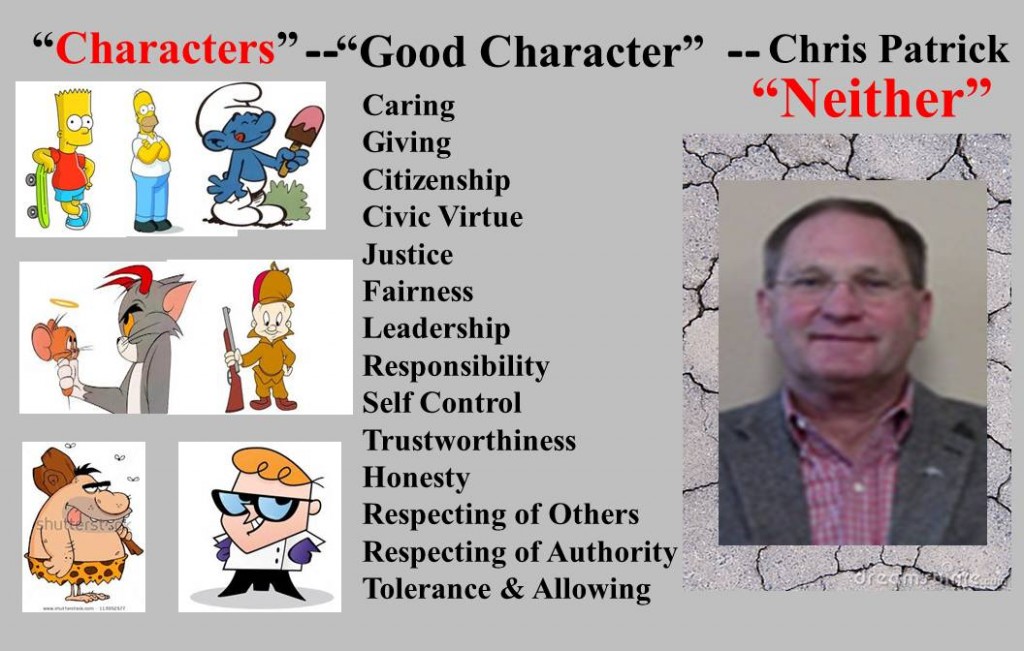