As most of us are already aware, there is a new high school being built just north of Paris. With this school construction comes alot of contractors, contracts, and more specifically – concrete.

While most of the discussions on conflicts of interest have dealt with the county highway department, municipalities, townships, and state and federal grants, there is a conflict that hasn’t been discussed yet.

The reasoning behind township and outlieing municipality conflicts is because there are intergovernmental agreements in place, or there is the potential for them, between the county and those entities.

The less talked about agreements, and a potential for future agreements, exist between Edgar County and District 4, District 95, and the Paris Cooperative High School. With the current and future abilities to commit to these agreements, the same conflict with Chris Patrick exists.

The Illinois Capitol Development Board committed a $24,227,956 state grant to assist in building the new school. With a more than 130,000 square feet of building being erected, one can see this will take an enormous amount of concrete and other materials that could potentially be supplied by Chris Patrick and Zimmerly Ready Mix.

A concrete bidding question, from the New High School website:

Q: January 18, 2012.  When is the actual bid date for the concrete portion of the building with the reinforcing in it? Where will the bid openings be and what time?
A: The concrete bid package, including all reinforcing, was put out-to-bid on January 17, 2013.  Bids will be received, publicly opened and read at 2:00 PM on February 7, 2013 at the Paris Union School District 95 offices located at 300 South Eads Avenue, Paris, Illinois  61944.

I haven’t read a copy of the bid paperwork, but I do hope that the potential conflict in buying concrete from Zimmerly was revealed to those bidding on the project. It would be unfair to do otherwise, since the potential for different prices exists with out of town concrete providers.

The potential does exist, for a county board to enter into agreements/contracts with school districts. Potential exists for certain agreements to obtain a favorable vote from a person selling materials and supplies to the school districts. This is no different than agreements between the county, and  township and municipalities, for road and drainage work. This is a conflict of interest if Chris Patrick is invloved in any way, which he already has been, with discussions and votes on upgrading the road in front of the new high school or with sellling materials and supplies to contractors working on the new high school. 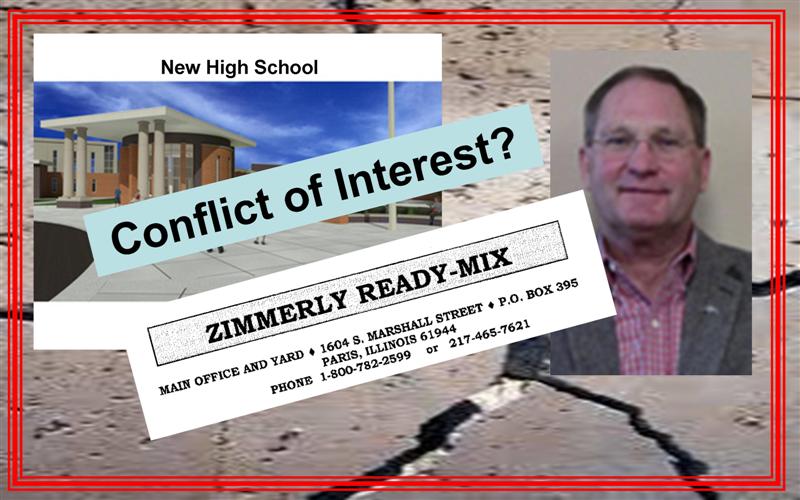