No milk for your child here!

Just when you think you have seen it all, up jumps the devil and assures you there is more to come!

Intelligence –  Having the faculty of reasoning and understanding

Stupid – Marked by a lack of intelligence

When you’re done reading this one I assure you, all will agree a lack of intelligence lead to asinine behavior supported with clear stupidity!

As always, we will start with the statute!

Nursing Mothers in the Workplace Act

"An employer shall provide reasonable unpaid break time each day to an employee who needs to express breast milk for her infant child."

Now comes the Asinine Behavior by yet another Edgar County employee.

We were informed last week that the Edgar County Airport Manager, Jimmy Wells, had banned a baby from the airport because the mother, an employee (and wife of a business owner) of a private business leasing space there, was breast feeding. He said he considered it “unprofessional” and a county airport employee was complaining.

So if this is the case, would Mr. Jimmy Wells be preventing a business from complying with the law?

"A mother may breastfeed her baby in any location, public or private, where the mother is otherwise authorized to be, irrespective of whether the nipple of the mother's breast is uncovered during or incidental to the breastfeeding;"

"Private right of action. A woman who has been denied the right to breastfeed by the owner or manager of a public or private location, other than a private residence or place of worship, may bring an action to enjoin future denials of the right to breastfeed. If the woman prevails in her suit, she shall be awarded reasonable attorney's fees and reasonable expenses of litigation."

If Mr. Jimmy Wells did in fact take this action as the Airport Manager he would be violating state law himself and be subjecting Edgar County to yet another lawsuit.

During the County Board Meeting on the 21st of November 2012 the Grandfather of the breast feeding child read this statement.  (Video of the meeting and the reading of this statement coming soon)  The prepared statement came after Mr. Bogue spent well over a week trying to come to an agreement with the airport manager and the airport board.

Where this article gets interesting, as if this isn’t over the top enough, is the fact that prior to the county board meeting we had been informed of what had happened and the source providing us the information was told, by one of the County Board members that was at the airport meeting, where the subject was raised by Jimmy Wells.

Interesting because during the county board meeting I confronted the board as to their knowledge of these events and all four that were at the airport meeting DENIED anything like this was ever discussed.

Did I say FOUR?  Yes, FOUR County Board members were together at an Airport meeting discussing county business yet no posting of a COUNTY BOARD meeting was anywhere to be found.  More on that violation of the law later!

The four present denied any breastfeeding issue was discussed yet a person who was there when it came up was disturbed enough to prepare a statement and read it to the county board and even contact an attorney in an effort to resolve the matter.  So who is telling the truth?  Based on the track record of our elected officials, I tend to not believe much they say anymore as they have lied so many times we can’t keep track.

It would appear that Mr. Jimmy Wells doesn’t know how to be honest about certain things as well.  You see when all this hit the fan this week, John Kraft stopped by the airport and provided a Freedom of Information Act request for some records, of which ALL LEASES was included.

Telling us he doesn’t have any leases when in fact he does would be concealing a public record!

All indications are, that after the Grandfather of the breast feeding baby read his statement to the county board, a clear retaliation against his son Rusty Bogue, owner of RSB Aviation, is being pursued.  Pursued in a manner that just might jump up and bite the county in the back side!  I say that because Mr. Jimmy Wells was dumb enough to inform Rusty Bogue that had he not contacted the Watchdogs (he never did, we contacted him) and his father not read the statement to the county board and not gotten an attorney involved none of this would have happened.

None of what Mr. Wells?  The Board Members claimed nothing happen so what exactly is it that never would have happened?  You see, it’s pretty tough to keep the truth suppressed when so many people are involved.  Even harder when those we can’t trust are stupid enough to circle the wagon and claim nothing took place.

It’s not as if certain members of the Airport Management and Board members aren’t familiar with illegal acts.  For example, Chris Patrick, a recently elected County Board Member is the Chairman of the Airport Board and Vice President of PEDCO, which none other than Bobby Colvin is the President. Interesting company he keeps isn’t it!

Chris Patrick is currently one of those that IDOT is investigating for getting a driveway on the taxpayers dime.  He had no comment when confronted at the county Board meeting on that issue so I guess he will fit right in with the rest of those who have mastered the phrase of “no comment”!  It’s been reported to us that he is living with his girlfriend who works at the airport.  I wonder how she got her job?

Airport Board member Dale Barkley just happens to be the Paris Township Road Commissioner.  You may remember these articles here and here.  It’s clear, breaking the law doesn’t seem to bother these folks.

Verlin Funkhouser, outgoing County Board member, also sits on the Airport Board and he is the very board member that assured me he would look into the gun running of the past sheriff, as we can’t have that.  He has not looked into anything in that regard so I can’t believe anything he says other than he did notice the dirt in the corners of the court house floor and felt the Sheriff wasn’t getting it clean enough.

Kevin Trogdon, another outgoing County Board member, also sits on the Airport Board.  Kevin has mastered the path of silence when confronted with facts that put him in the front and center of questionable actions.  Failure to put farm ground out for bid comes to mind and to this day, no bid notice has gone out.

Karl Farnham, yet another County Board member, was present during the Airport meeting however he is not on the Airport Board.  So what was Karl doing there?  According to our sources it was his chance to talk to some county board members to figure out who the next County Chairman is going to be, which is something that is supposed to be done in public but breaking the law doesn’t bother Karl, as long as the statute of limitations has passed.  At least that was the only concern regarding the guns he sold illegally when he was sheriff.

Ben Jenness, yet another County Board member, was also present during the Airport meeting.

Well I have to admit, I never dreamed I would be willing to fight like hell on a breast feeding issue, but fight I will.  The nerve of a County Employee to try and ban a baby from a Public Airport over Breastfeeding, and then implement clear retaliation when exposed, is yet another example of why We The People have to step up and get involved.  This has to stop! 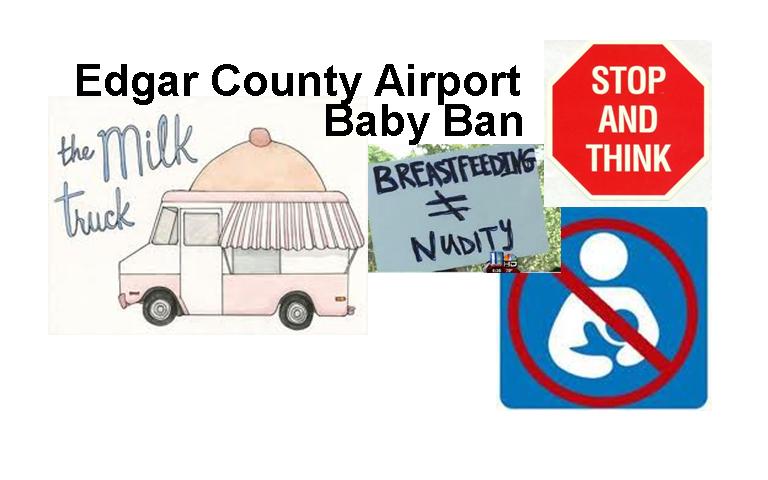