We couldn’t attend the October 15, 2012 Clark-Edgar Rural Water District meeting – we were working other issues at the time. We do find it quite interesting what is said, during open meetings, when people aren’t there to listen. In this case though, they taped their meeting and we received a copy of the tape through a Freedom Of Information Act (FOIA) request.

Let’s just say it was eye-opening, and reinforced the need to vote YES for elected trustees instead of appointed trustees. They MUST be held accountable to the public.

Tom Jones: Is there any point in time, where someone higher up in the courts, will tell you that this is a waste of time

Attorney: I’m just hoping that they realize that there are limits as to what they can do in a request. In the attorney general response to the phone issue – that’s a dead issue… They can’t ask for stuff that you don’t have. I tried to make that clear and I’m hoping that that educates them. The only thing that’s going to help is education. When they realize that uh, uhm, there’s certain things they can’t ask for. If they narrow their scope and they ask for stuff that they are entitled ask for then you have to respond. They can continue to do this…the statute, if you look at the Freedom of Information Act statute, and then there’s a case that I, in fact there’s a case that I cited in the response to the Attorney General’s office, they indicate in there that one of your functions is to provide documentation to the public, and uh as much as much as furnishing water that’s one of your functions is to provide documentation to the public.

Tom Jones: I’d like Roger or somebody up above em aught to see it’s a lot of nonsense coming in cause they’re doin this to not only us but several other firms.

Sandra Neal: Are there more and more of them?

Unkn: Roger Eddy, what are they after Roger for?

Bob Colvin: Roger was at a uhh, I talked to Roger the other day on another matter, I said by the way you’re on my hit list. And he said “Bob what’d I do to you?” and I said “well since after you left they’ve been pickin on me.” And he said “oh, no, I was at a hearing with them two weeks ago in Springfield.” Those two guys, the hearing officer, and Roger..with..charges of misuse of public funds and after fifteen or twenty minutes, the hearing officer said “What am I doing here?”…They said well uh all these stupid charges and the hearing officer repeated he said “What am I doing here?” he said nothing that you said means anything to me. And you know what one of them said, he even called Bob Colvin… You remember that meeting he called me here? I stepped outside. And they said they even called Bob Colvin at a meeting and Roger said…is that…is that on?…

Bob Colvin:  Roger said they came to this school board meeting, wouldn’t sign in, wouldn’t give them their name, as for some reason he knew they were from Paris. He said, he said I called Bob to find out who these idiots were and he said he identified them before I even described them. Then the hearing officer said “this hearing’s over.” And, and they, they, summoned him again, they got another charge against him.

Unkn: Well there’s..is this on tape?

Unkn: Well they’re persistent aren’t they. Well maybe if they lose the case, and we charge them for lawyer’s fees maybe that’ll change their attitude.

Unkn: Has anybody else, uhm, retained an attorney…cause of them?

Bob Colvin: I’m not so sure that several people haven’t.

Sandra Neal:  Who all are they after, Bob? Uh what other…

Bob Colvin:  Anybody and everybody

Sandra Neal:  What other agencies,””” I know they’re after Crestwood School cause that’s where…

Sandra Neal:  Are they after the Senior Citizens?

Tom Jones: I’ll tell you this much, they don’t discriminate do they.

Unkn: How do they have time to do all that…

Unkn: Well they’ve got a government pension you’ve got all the time in the world.

Unkn: Nothin else to do. Can’t imagine why they’d want to do it – make a lot of friends that way

Sandra Neal:  Well if they get their way and everybody gets kicked off of all these boards who’s gonna, who they got, have they got enough people on their side to run for all these positions?

Unkn: far as I can determine so far is there are two, maybe three people.

Unkn: Did Lisa tell ya that we had a FOIA request for that information from Brad Holbrook?

Bob Colvin: Did Lisa tell you what I said about that?

Unkn: I can imagine that I don’t want to hear it, with ladies present

Kevin Conover:  All the more important that uh this board hang together

Unkn: He didn’t take Roger’s place, Roger backed out and give it to him

Sandra Neal: Did Roger give it to him?

Mr. Jones is correct, this is a waste of time, considering the CERWD is not allowed, by law, to charge for providing documents pursuant to a FOIA request unless – it is more than 50 pages, or – it is a commercial request. The CERWD is spending public money defending an indefensible position.

A public body can charge for actual cost of recording media (CD, DVD, Tape, etc.) and

(a) ...A public body may not charge the requester for the costs of any search for and review of the records or other personnel costs associated with reproducing the records, except for commercial requests...

In paragraph (b), A public body can charge for paper copies of anything over 50 pages, and again states the above sentence from paragraph (a).

(a) ...A public body may not charge the requester for the costs of any search for and review of the records or other personnel costs associated with reproducing the records, except for commercial requests...

Paragraph (c) states how to request free or reduced copies, and also states news media (and individuals) are not considered commercial requests.

Paragraph (d) :  (d) The imposition of a fee not consistent with subsections (6)(a) and (b) of this Act constitutes a denial of access to public records for the purposes of judicial review.

Paragraph (f) says a public body can charge up to $10.00 per hour to search for and retrieve records after the first 8 hours spent searching and retrieving. It can charge the actual cost to retrieve records from an off-site of third party, which Francis-Assoc. is… But here is where it gets interesting: The last sentence in paragraph (f) states: The provisions of this subsection (f) apply only to commercial requests.

So, YES, Mr. Jones, this is a waste of time and public money defending your obvious intentional and willful  violation of the law! Not to mention hiring a second attorney which, by statute, is not allowed.

The Only Thing That’s Going To Help Is Education

We agree on this point also – except that you will be getting the “education” as we already know what we can and cannot ask for. We didn’t just fall off the bus yesterday.

It has already been made clear by the FOIA and Attorney General, that documents produce for a public body and held with a contracted third party (Francis-Assoc, Phone Company, Etc) ARE public record, are considered to be in the possession of the public body for purposes of FOIA, and must be provided. It has also been made clear, through an Attorney General Binding Opinion (you can also read it below), that each and every individual person shall be treated as a single request – it doesn’t even matter if they request the same document, and are married and living in the same house – they are two separate requests. So your amateurish attempt at getting this dismissed from the AGs Office will fail!  Shove that in your pipe and smoke it.

“Are There More And More Of Them?”

Sandra Neal, a short answer to your question is Yes, there are “more and more” of us.

We are not “after” Crestwood, we are after the truth behind what happened to a 6 year old boy that was locked outside the school on his second day. Some people allege they were lied to by the Crestwood Administration, we will report what we find whether it supports the school administration or supports the concerned parties.

We also don’t want “everybody kicked off of all these boards” as there are plenty of good people already serving on some of these boards. What we do want are elected CERWD Trustees that will answer to the public and quit going down the road to bankruptcy –  and Mass Transit Trustees that are actually permitted by law to sit on the Mass Transit board – the Clark County board fixed their illegal appointment extremely quick, why is it the Edgar County Board cannot do the same (EDIT: Smith is still a Trustee, Trogdon did “resign”, but only after more than 90 days of arguing – Clark County resolved it in 3 weeks) ?

The notion that we are “after” any public body is nonsense, the Animal Control Shelter was on the verge of being (illegally – similar to the Edgar County Ambulance handover to Dee Burgin in which he still owes $100,000 with no one willing to collect) handed over to an organization with a “history” behind them – that transaction came to an abrupt halt.  The Mass Transit District has former employees under investigation, and when we first looked into them they had three trustees that were not allowed by law to sit on that board – if that means we are “after” them so be it.

Bob Colvin, your comments are so far out there we don’t know which one of you are telling the lies – you or Roger Eddy. Rest assured, we can refute everything you said when you didn’t think anybody was listening. We have the tape from the Illinois Election Commission Hearing in Springfield and will write another article, and upload the audio, on this subject – just for you.

Here is the AGs Binding Opinion on recurrent requestors: 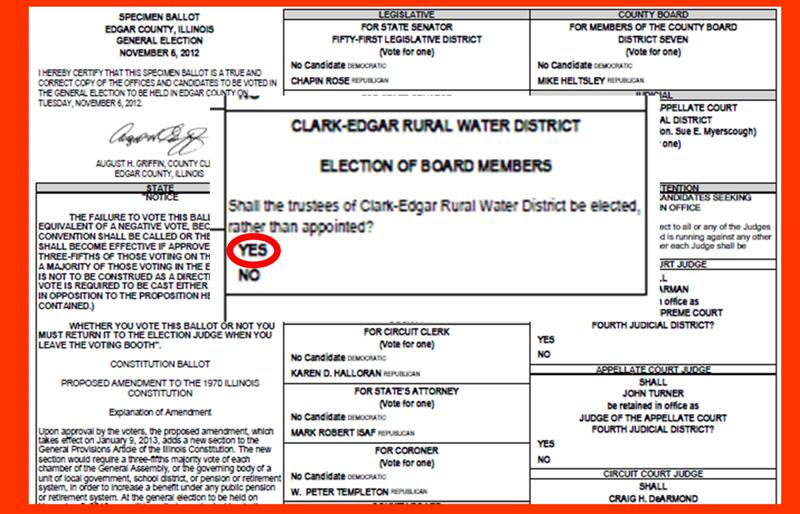