This article will explore our local property tax system, and the efforts our local elected and appointed public officials and former public officials go to in order to conceal information detrimental to their plea for 100% property tax exemptions. The taxpayers of this county should expect equal and fair treatment on all property tax related issues. False, misleading, or omitted information on official tax forms should not be tolerated. We ran articles on this subject as early as April of this year – here, and here.

The final decision from the Illinois Department of Revenue on the Transfer Station property is that the City of Paris is 100% exempt on property taxes for 2012. It also states that the Edgar County Assessor should assess the property “leases” to Ingrum Waste Disposal II, Inc. (Page 2 of the pdf below). According to the amended agreement between the city and IWD, Inc. with the resulting tax being the responsibility of IWD – not the city (Page 21, item #11 of the pdf below).

I can only hope this issue has a higher priority in the justice system than spending almost two years prosecuting someone for driving on a suspended license, as was recently pursued by the State’s Attorney’s Office.

Public corruption, as this clearly is, should be the top priority of prosecutors, second only to capital crimes. The cost of prosecution weighed against the potential gain of a finding of guilty – The potential gain here, is instilling in the minds of our public officials that conduct such as this will NOT be tolerated. This will greatly increase the public trust in our local government.

The property in question here is owned by the city of Paris and leased or “contracted” by Ingrum Waste Disposal II, Inc. It is operated for-profit, and the property is no longer for public use (during the life of their agreement).

Inspecting the documents submitted to IL. DOR: When I asked our assessor for a copy of the documents the county sent to the Dept of Revenue, she told me she didn’t keep a copy and sent the originals to DOR. Sensing something wrong with not keeping copies, I immediately submitted a FOIA request to the DOR seeking a copy of all correspondence between the City of Paris, Edgar County, and DOR.

The documentation I received was priceless, as you will read about below. My suspicions were confirmed – in an effort to get by without paying property taxes, there was a joint effort to lie, misstate evidence, and conceal the truth behind the agreements and operations of the Transfer Station. Even when I asked the assessor this morning whether she received a determination from DOR on the property, she said no, they needed more information from the city. The documentation I received from DOR, the complete record of correspondence, shows no letter requesting additional information from the city. After I showed the copy I received, she confirmed the Transfer Station and property would be assessed and taxed.

I’m just glad Todd, from the Department Of Revenue, could see through all the “smoke and mirrors” while reviewing the information provided.

Now to the actual documents submitted…

Inaccurate statements on the PTAX-300:

Step 3, Line 12, “Is any income derived from this property

It should be checked “YES” – The question asks if ANY income is derived, not if the property owner derives income…

The transfer station is operated by Ingrum Waste Disposal II, Inc. and they derive income from this property.

– The transfer station is operated by IWD, a for-profit business. Beverly Markley knew this before she filled the form in and certified to its accuracy.  She also knew that marking the box NO in regards to income from the property was not true nor accurate!

The last sentence implies the City is still operating this Solid Waste Facility, when in fact it is operated by IWD, Inc as a for-profit business. Again, Mr. Ruff knew this at the time he completed the affidavit.

In reading numbers 5 and 7, one could conclude the city is still paying a subsidy to the operators of the Waste Transfer Facility. While both paragraphs are true at face value, he failed to state the City no longer pays a subsidy, and hasn’t for years, to IWD to operate this facility. IWD operates it as a for-profit business with a luxurious no bid contract giving him a clear exclusive.

This document is effectively a lease of the property. It gives IWD exclusive use and that they can retain all revenue from the operation of the facility during the term of the “agreement.”

The City Transfer Station is operated as a for-profit business and is no longer available for public use.

The part of the property in question should, in addition to the building, include the acreage contained within the fence surrounding the building. This acreage is used by IWD in the operation of the Waste Transfer Facility. 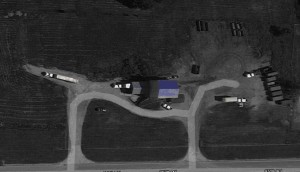 What these public officials have done is distort the facts to sway the opinion of the Illinois Department of Revenue. It is clear this is a combined effort between the Edgar County Assessor’s Office and the City of Paris. Any other party doing this would be considered perjury and tax evasion.

Now is the time for some definitions:

A person commits perjury when he intentionally lies under oath, perjury can also be committed by knowingly signing or acknowledging a written legal document (such as affidavit, declaration under penalty of perjury, deed, license application, tax return) that contains false information. (ABC News)

View the complete file below: 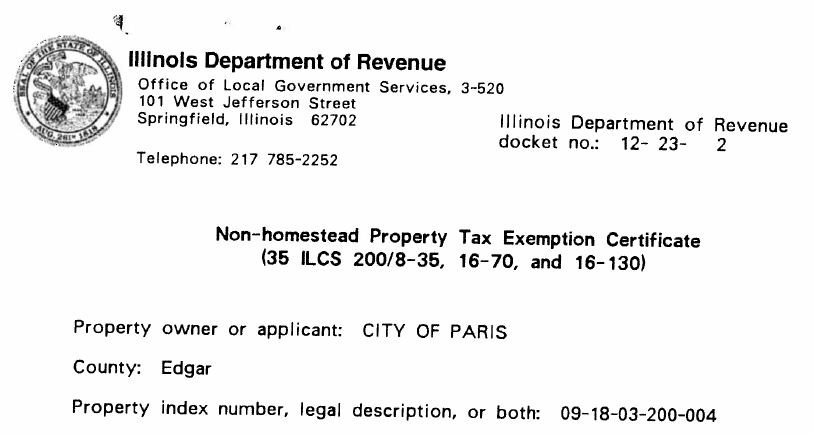