I have said for years when you go to a public meeting you will know right away if you need to go back and dig a little deeper, based on how you are treated and spoken to.  One giant indicator there is something wrong is Deception.

The Illinois Statute actually has a Criminal Definition of Deception.

The City of Paris – via e-mail, Tom Jones-Chairman of CERWD – via official letters, and Bob Colvin-verbally himself, have all created and/or confirmed a false impression.  That impression created by the above mentioned people was that Bob Colvin is an Engineer.  As many may now know from the article in the recent Disclosure Heartland, Bob Colvin is NOT an Engineer, contrary to his own words, outside one of the Water District Meetings. All of those mentioned have FAILED to correct a false impression that they themselves created.

Now that we know these folks have no problem deceiving the public, we have to move on to what other deceptive practice is taking place.

During a recent CERWD meeting, I informed the board by all indications Bob Colvin is running that public body.  That conclusion was based on the fact any time you ask a question of the board, the Chairman always turns and looks straight at Bob Colvin as if Bob is supposed to answer the question, which several times he has.

The recent meeting in Metcalf was no different, other than we have now uncovered even more deception from Mr. Colvin and Tom Jones with the CERWD, to include what appears to be acts in direct violation of the law.

Note my questions in the short video, but more importantly, note that I am asking Tom Jones, who is standing and had just finished talking, when the Metcalf Mayor had opened it for questions.

As usual when questioned, Mr. Jones is silent, then turns to Bob Colvin as if Bob has the answer, or he hope he does, and like every other time, Bob jumps right in to answer the question, which in this case is bad for him……………again!

My first question was pertaining to the annexation process.  Note Mr. Jones’s head turn at the 15 second mark in the video.  The question was addressed to him but it was Bob Colvin that answered, after Mr. Jones clearly couldn’t answer or simply refused to answer a very basic question pertaining to a process they have gone through dozens of times.

Bob Colvin opens his mouth at the 21 second mark to answer for Mr. Jones and makes referenced to a CITY ANNEXATION, which has absolutely NOTHING to do with the Village of Metcalf annexing into the CERWD, so for starters we have to throw a flag and call a lie a lie!

He then claims at the 23 second mark, “It’s in the City Annexation but I don’t think its in the water district” .    This is important because this is a man who has collected millions of dollars through his company by getting communities to sign up into the CERWD.

“I don’t think its in the water district”.

We already know from the CERWD Board NONE of those board members had read the statute, so why should we expect the guy who is making millions from our tax dollars to read the law and apply it?  Because if you apply it in the case of Metcalf, he can’t make the big bucks since the law forbids them from doing what they were planning and proposing to do!   Can you say BUSTED?

Mr. Colvin, AKA Francis Associates, or is it really Curl & Associates, was prepared to make $90,856.80 if he could convince Metcalf to follow their instructions and “annex” into the water district………..illegally!

How convenient for Mr. Colvin.

How sad for the Rule of Law!

It is evident the CERWD is doing several things well outside the scope of the law, but that doesn’t appear to bother them based on their actions and responses to valid questions.

For example, the above video referenced my questions pertaining to CERWD providing water to Redmond.  Not only was Tom Jones CLUELESS as to whether Redmond was annexed or not, he AGAIN, did the BOBBLE HEAD turn to Bob Colvin to answer the question.

There was a little problem with Mr. Colvin’s response!  When compared to the same question addressed to the CERWD board at their regular board meeting, you can see they don’t have their story straight!  See for yourself!

The truth of the matter in regards to Redmond is they are not annexed into the district and are currently being charged for water by the CERWD, which is an action that totally disregards the law.  Current, as well as past actions, reflect Mr. Colvin and Mr. Jones know this to be true, the law be damned!

We have far more to expose on the Redmond issue than we can cover in this article so stay tuned for a major exposure of illegal acts by this group in the next Disclosure Heartland edition that is scheduled to hit the stands October 10th! 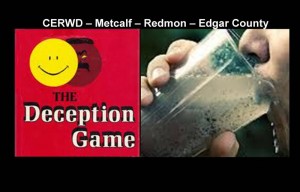