Convicted by a jury from now to eternity!

As the word of a settlement being reached with Dee Burgin, Terry Rogers, and the county insurance company swirls over their Civil Rights conviction, it’s pretty clear certain people have no clue what a settlement really means.

The judgment entered in the federal court on the facts at trial is what it is.  The law has not changed because of a settlement.  Judge McCuskey’s Judgment Order has not been reversed or overturned. Their case is un-appealable now that a settlement has been reached.

They stand convicted by a jury for violating a persons Civil Rights from now to eternity!

Burgin and Rogers filed an appeal which would have tied up the plaintiffs award for at least a year.  A cross-appeal was filed, however, the plaintiff did not want to wait a year or more for her money.

A petition was filed for attorneys fees for all of the work on the case, which resulted in the jury verdict in plaintiffs’ favor.  42 U.S. Code Section 1988 allows a prevailing plaintiff to recover her attorney fees in a civil rights case.  The attorney fees, of course, are always paid by the insurance company.

On August 14th, a mandatory settlement conference with a staff attorney at the Seventh Circuit Court of Appeals took place. All of the discussions during that conference are strictly confidential.

If Dee Burgin is discussing the settlement conference, he is in violation of the confidentiality requirement.

The discussions apparently related to a settlement for a lump sum of money.  This assumption on our part is based on the fact the County’s insurance company cut a check for $162,738.00 to Angelina Cianfaglione and Redwood Law Office.

Both appeals will be dismissed and the matter will now remain settled. The settlement release is a standard format.  We understand that the plaintiff and/or their attorneys, Redwood Law Firm has refused to agree to a confidentiality clause, thus we will run another story exposing more details as we get them.  The settlement of the fees and damages has NOTHING to do with the convictions.

They stand convicted by a jury from now to eternity

A point of interest for anyone who in the last 2 years who was searched or their car searched, revealing no drugs, based on Burgin’s dog, you might want to contact the Redwood Law Firm as I suspect they would love to speak to you! 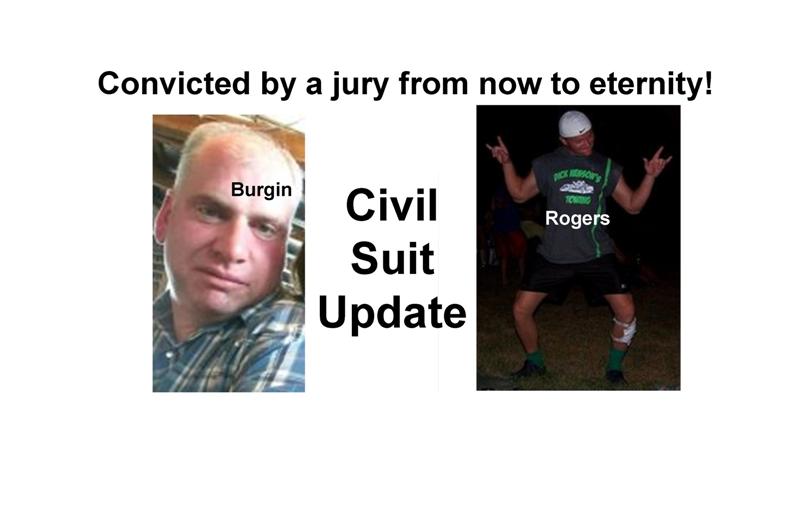