After attending now three meetings at the Clark-Edgar Rural Water District, I can’t come up with an adjective that reflects what we have seen.

Having looked at just about every other public body in this county, I have to say I never imagined I would hear the things I heard at this last meeting.  I don’t know whether to cry, scream, or bang my head against the wall because it’s clear when people are in a position of control for as long as Tom Jones has been, it’s time for him to resign.

When questioned about the use of public money for private purpose being illegal he agreed that he was aware you are not allowed to do it………………yet this public body, just as Nanette Crippes of the 911 board did, used public money to give Christmas Bonuses and to purchase baby gifts.

Over TWENTY FOUR MILLION in Debt and they are giving raises, Christmas bonuses and buying baby gifts?

397 People in the Clark Edgar Rural Water District that have paid their money for water, have yet to be hooked up, and in some cases they have been waiting over 15 years. Their payments are PUBLIC MONEY and the use of public money for private Christmas bonuses and baby gifts is not legal! ANY money in the hands of a Public Body is Public money, even the money you give them every month for your water service.

When confronted with this fact, the comment from his mouth is yet more confirmation that they ALL must go, as not a single one of them spoke up to correct Mr. Jones.

“We do not operate on Tax Money”

I did not ask about TAX money but since his position when questioned about the use of Public Money is they don’t operate on Tax Money let’s take a look at their own audit!

CERWD Audit from last year reflects a CDAP Grant as Revenue in the amount of $1,178,604.00 Dollars. Anyone care to tell Mr. Jones where Grant Money comes from?  (CERWD Audit)

As time permits we will dig in much deeper to expose what is going on with this organization, but for starters, our FOIA to the State Confirmed that the Clark-Edgar Rural Water District has NEVER received a CDAP grant. (FOIA Response from the state)

It appears the Grants are issued to the Townships, as it’s the Townships that apply for that money.  Our question:

Why would Township Grant Money be reported as Revenue on the CERWD Audit when it was Township Revenue?

Does it have anything to do with the comment in their minutes that they need to SHOW more revenue?

When presented with those totals Mr. Jones disagreed and said it was not that much.  His explanation was:

Mr. Jones, the State of Illinois counts interest and one need only to look at the debt levels published by the State Comptroller to understand the most basic principles of accounting.   http://www.ioc.state.il.us/index.cfm/fiscal-condition/debt-levels/

What is so sad with his comment is the fact I think they actually believes interest doesn’t count, even though it’s clearly listed in their Audit.  Why list it in the Audit if it doesn’t count?

Know another word for Interest?  Penalty.  Are you sitting down?  Minutes reflect they couldn’t pay the Enerstar Bill because the credit card used for that was at its limit.  When confronted about the use of a credit card to pay bills I was told they do that to avoid a 10% penalty which you might as well call it interest on the balance owed.

Why is all this a concern?

397 customers are still waiting on water, water rates are going up a guaranteed 5% every year, and this public body gives money away as gifts and bonuses, couldn’t pay their enerstar bill because of a maxed out credit card and they now claim they don’t count interest, and they are 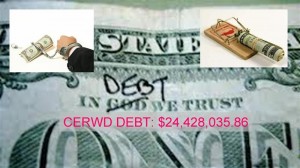