The East Central Illinois Mass Transit District held a regularly scheduled meeting today, July 10, 2012. No information was released as far as the on going investigations.

However; It has been reported to us that Illinois Department of Transportation (IDOT) Investigators are in Paris and Edgar County interviewing several employees of the East Central Illinois Mass Transit District. So for now, the investigation is continuing into the alleged theft/embezzlement case(s) and should wrap up in the upcoming weeks. There is still no word referencing the extent of the alleged acts.

The Law and the Mass Transit District Board of Trustees

– (In a nutshell) When a district is created by one or more (units of local government), the corporate authorities or the county board(s) of the district appoints the trustees in proportion to the percentage of population served, and:

– …..No Trustee of any District may be an elected official of the municipality or municipalities or county or counties creating the district.

Why does it take a concerned citizen to point out what the appointed members and the members of the boards that appointed them should already know? It’s not that hard to read the law governing mass transit districts and it doesn’t take an attorney to intepret it.

What is even more interesting is the fact that there were some members sitting on the board illegally, and no one seems to know who appointed them.  Sadly, Edgar County Board Member (Kevin Trogden), the Mayor of Paris (Craig Smith), and an elected official from Clark County (???????????)  are on the board and could have simply read the statute the board was to operate under. They would have read that they were not allowed to sit on the board. 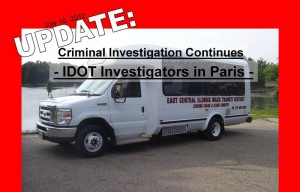