The former Charleston, IL  City Planner, Jeff Finley, was charged last month with embezzling over $22,000 from Code Enforcement Officials between 2004 and 2008.  The indictment outlines he wrote checks to himself as electronic payments to his personal credit cards to inlclude Macy’s.  I imagine the indictment for the Mass Transit case is going to read similar, but with a lot more theft listed that this one.  (indicement file here)

Wait a minute!  Why are the Feds looking BACK and holding people accountable?  We have been told numerous times the misappropriations and wrong doing we have found was in the past so let it go.  Note that they didn’t tell us it didn’t happen!  They simply don’t want to look back and hold them accountable because of who it was!

What is it with the refusal to hold people accountable in this county.  Yes, they brought charges against the Health Department employee but even that took arm twisting and many wanted to simply let it go if it was paid back.  Some believe that was because of the influence from family relations in this town.  Anyone surprised?

A past county employee gets paid $43,000.00 with a bogus invoice claiming it was approved by the board and we PROVED it was not, but what did the board do when it was uncovered over a year later?  Made the person sign a contract to pay it back and all was good in their eyes. That action was a crime and it was covered up.  Now that very action was used as part of more lies about the ambulance scandal implying that was part of Dee Burgin payments.  WRONG!  Those payments were almost 2 years after the purchase of the ambulance and had nothing to do with that initial transaction.

How about the past sheriff and his illegal gun sales (gun running) and use of inmates for private roofing jobs?  Illegal selling of seized property to his own deputies and there is more!  All factually proven and in one case top judicial input pointing out its wrong!

County Board members who GIVE AWAY county assets with no board approval or take out loans without the rest of the board knowing anything about it?

What happens when you don’t take criminal action against these people?  You end up with the same guy violating a persons civil rights and costing you, the tax payer, more money because we now have yet another official misconduct type event that will in fact lead to higher insurance rates.  Had there been proper over-site and prosecution for past actions the person would have never been a deputy and a persons civil rights would not have been violated.

That doesn’t take into account the fact it may have sent a message to everyone that if you do these type of things you are going to be prosecuted.  That type of message is a deterrent to future crimes.  Ignore it and people think they can simply get away with it, and so far many have!  We are changing that!

So the Feds have no problem going back to 2004 to prosecute crimes of theft, and we know the state and feds are going back 10 years on the Mass Transit matter so again, what does it take for the States Attorney to prosecute the crimes we have uncovered?

I have been told it takes a criminal complaint from law enforcement to be provided to him.  That is interesting considering review of Illinois Supreme Court cases we have read outline that anyone who knows of a crime being committed should contact their County States Attorney or law enforcement.  I wonder why that process works in other counties but not in Edgar County?  The one case I filed with rock solid evidence was turned away and not prosecuted.  The only explanation I received was that the States Attorney was not going to prosecute.  Note that I was not told there was no evidence to support my allegations!  In fact there was so much evidence the investigator agreed and turned it in to the States Attorney.  Why would they turn it over to the States Attorney if if there was nothing to it?

I do know that the States Attorney is and has prosecuted numerous criminal cases but the pattern appears to be prosecutions of citizen criminals and not public officials.  I guess when you go after the people in the office down the hall or down the steps it’s a little more personal because,  gosh, maybe they just had a barbecue with them last weekend.

A person can use the county credit card for their own purpose, have their family on the cell phone plan, long before it got put into the contract, which we believe was a means to protect her, purchase christmas presents with NO RECORD of who got what, file false claims to be paid for meetings that never took place etc, etc, .  We could go on for days but the point is, crimes have been committed and they are not getting prosecuted.

Not enough for you? How about a city official taking the city credit card on vacation, running up thousands of dollars for personal expenses, then coming back to Paris and filing bankruptcy. Oh, and still sitting in the same position he was in before using the city credit card, with no charges filed.  More on that story to come!

Well hang in there folks, because we are not going anywhere and the other stories we are working on will include an interesting letter from a sitting judge demanding accountability, and that was directed to a top elected official in the Edgar County Courthouse! 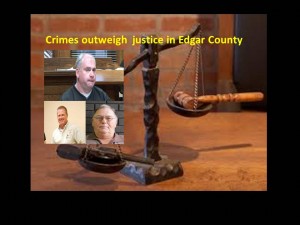