Three of the "Kansas 6" had their first appearance in court today. We first broke this story with these articles.

Dillon Armes appeared with council and was assigned a preliminary hearing for July 9, 2012 - He remains in custody.

Quinton Inman appeared with council and was assigned a June 21, 2012 pretrial date to consider a bond reduction motion. He was also assigned a preliminary hearing date of July 9, 2012, at 1:30 P.M. - He remains in custody.

Cameron Minor appeared with council. A bond reduction hearing was performed with defense calling several witnesses and requesting a bond reduction to $5000. State's Attorney argued that the allegations of the case should keep the bond the same. The Judge ruled in favor of reducing the bond to $12,000 (10%) with the stipulation that Mr. Minor may enter Vigo County, Indiana for employment purposes. All other conditions remain the same as original bond. He remains in custody pending payment of 10% ($1200) of the bond set.

It was stated in court that the individuals allegedly wore black face masks while allegedly commiting the acts charged.

Check back for more updates as they become available. 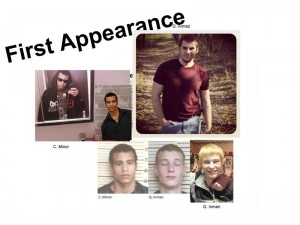