A Kansas resident, Brenda Arbogast - formally known as Brenda Graves, has filed a lawsuit against the Kansas School District and its Board Members for negligence and willful and wanton misconduct over injuries she claimed she suffered during a visit to the school.

She claims that on May 20th of 2011 she suffered injuries after  falling over a large wooden box that was 4" tall.  Yes, 4 inches is what the court records claim. I wonder what a small wooden box would be if 4" is a large one?

Our sources have confirmed she acknowledged she had no intention of suing the school over the incident last year, however; since then she has married a local lawyer who just recently got his law license back, Alan Arbogast.  The filing took place just days shy of the maximum allowable time frame to file, which was 365 days.

There are two counts filed against the school of which they are seeking in excess of $50,000.00 on each count, PLUS court costs.

It also turns out that this woman is the Grandmother of Cameron Minor, one of the Kansas 6 who was recently arrested for multiple felony charges and the attorney in the school case is family relation to the attorney defending Cameron Minor, his now step-grandson.

The entire filing against the school can be downloaded here. 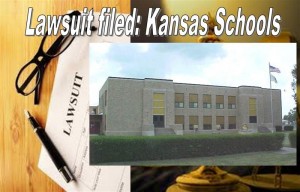