After receiving several tips on our hotline concerning Paris Township using Public Funds to pave (chip and seal) the private drives of several homeowners, we decided to check into the issue.

Here are the facts as determined by mulitple Freedom Of Information Act (FOIA) requests, and by other means:

- The paving of private drives stopped late last year after some individuals were informed that it might not be legal. The taxpayers in Paris Township owe a big "Thank You" to the person(s) that refused to allow the continued illegal use of Public Funds - I'll give you a hint, it wasn't their attorney.

- The "selective" paving of private drives had been going on for years.

- There were at least three homeowners that had their driveways paved, at the direction of the township road commissioner, within the past two years.

- One of those driveways were paved twice.

- With the information provide to us, we could not find where the township had invoiced the homeowners for the labor and materials used in the paving of their private drives. We submitted an additional FOIA request asking for copies of invoices and proof of payment, but have not received the requested information as of the date of this article.  Although we have been informed they have now invoiced those who recieved oil and chip we should ask, since when is a public body allowed to go into business and compete with private business?  If they can afford to do private driveways on your tax dime maybe we are being taxed to much!

The initial FOIA request asked for information on the above issue and for copies of the credit cards used by the township road department. They initially denied having any credit cards. I filed a FOIA request for review with the Illinois Attorney General and the Paris Township attorney  responded by supplying parts of the requested records. I did use spellcheck on my request, so I'm not sure why all of the documents weren't provided by the attorney. Once again, the local government body is wasting taxpayer money by refusing to supply Public Records upon request, not to mention paying an attorney to type a reply and provide part of the documents. Now I'll have to file another complaint with the Attorney General, the Township will pay the attorney again...ooohhh, wait...now we know the process for the attorney to get paid and make more money......

We have pointed out numerous times in the past year that improper use of Public Funds violates the Constitution of the State of Illinois, is a Class 4 Felony, and is Official Misconduct.

We will update this when we receive the response to our FOIA request concerning the invoices and proof of payment. At that time, we will name the home owners and the commissioner. We will also let you know who reimbursed the township and who didn't. There will be pictures of the driveways in question. 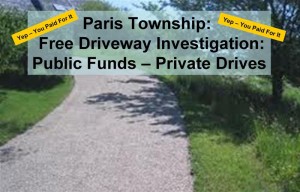