There have been alot of rumors spreading thoughout Edgar County the past few weeks, hopefully this will bring some of them to light.

Today, the East Central Illinois Mass Transit District and Chester P. Sutton Senior Center have terminated the employment of their CEO, Kami Miller, who has been employed there for a number of years. While we have no details as to the reason(s) for her termination, we do know there is an ongoing investigation. We do not know who is investigating, nor do we know who is auditing - give us time, we'll figure it all out in a day or two and run an updated article on the subject.

Now a word for their board members, one of which is Kevin Trogden (also elected to the Edgar County Board) - "Secrecy is the badge of fraud and breeds mistrust in our government officials". 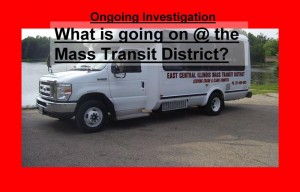