Once again Rep.  Adam Brown votes to screw the taxpayers.
Brown was a NO vote and Rose was a YES vote. Amazingly, even triple-dipper Roger Eddy voted YES on the reform back in March.
HB5078 basically says that someone elected to two positions in different local governments could not collect two pensions under legislation that passed the Illinois Senate Friday, May 25, 2012.
House Bill 5078 clarifies that officials cannot get credit toward a pension for both jobs. It passed on a vote of 31-18 Friday.

The bill’s chief sponsor, Sen. Don Harmon, D-Oak Park, said he believes state law was already clear about pensions for people who serve both as a county board member and another locally elected position. However, a legal opinion from a state’s attorney made the already “tangled web” even more complicated, he said. 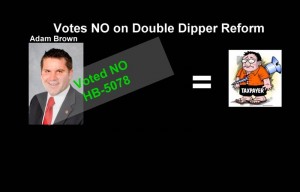