You Cant Make This Up!

Mr. Clark, you should FIRE your ETSB attorney, Craig Smith, the current Mayor of Paris, Illinois!

At the beginning of my questions I referenced a document, a single piece of paper, that was handed out by Dee Burgin before the meeting started.  That single sheet of paper, pictured below, had a section highlighted pertaining to the public speaking amendment of the Open Meetings Act. Upon reading it, John Kraft and I both had to chuckle as what they have highlighted IS NOT ANY language found in the Open Meetings Act.

Something looked familiar though and I couldn’t put my finger on it for sure but I was pretty confident what they handed me was a page out of the Township Handbook, as I referenced in my question.    Upon leaving the meeting it took all of 10 minutes to confirm what they handed out to the public and presented to the public as the statute, was NOT the statute!  Rather misleading to say the least but that seems to be the norm for this group.

Who is to blame for such ignorance? I would say their attorney, as I have confirmed it was their attorney, Craig Smith, the current Mayor of Paris, who provided the information for them to share to the board.

$500 to Mr. Merle Clark if his highlighted information appears in the State statute pertaining to the public’s right to speak!

Sadly many of the questions I had were not “on the spot questions”, as they were presented at the last meeting so I wonder what his excuse for silence will be at the next meeting, which we have a ton of questions already prepared.

You see Mr. Clark; you have been snookered again, and by your own attorney.  First he helps you count blind ballots which are a violation of the open meetings act and now he hands you a piece of paper with the implication that what you’re providing the public is the statute on public speaking.  Two for two………..oh, wait; there is one more valiant move by your attorney!

He sat silent while you passed out a budget, that for some was the first time they have ever seen it, and then approved and adopted it!  What happen to the required no less than thirty day public inspection period Mr. Clark?

Now I understand you may not have realized that but I know for a fact one of your board members did as they knew that requirement from their school board obligations.  Too bad he stayed silent, but all that aside, the very person that should have informed you that you are again violating the law was your attorney, Craig Smith, the current Mayor of Paris and he sat silent!

Mr. Clark, you should FIRE your ETSB attorney,

Did I mention he is also the current Mayor of Paris, Illinois?

What I find so interesting in all of this is the fact that the very intent of the law, as stated in the law is that the intent of the Open Meetings Act is to PROTECT the citizen’s right to know!

(5 ILCS 120/1) (from Ch. 102, par. 41)
Sec. 1. Policy. It is the public policy of this State that public bodies exist to aid in the conduct of the people’s business and that the people have a right to be informed as to the conduct of their business. In order that the people shall be informed, the General Assembly finds and declares that it is the intent of this Act to ensure that the actions of public bodies be taken openly and that their deliberations be conducted openly.
The General Assembly further declares it to be the public policy of this State that its citizens shall be given advance notice of and the right to attend all meetings at which any business of a public body is discussed or acted upon in any way. Exceptions to the public’s right to attend exist only in those limited circumstances where the General Assembly has specifically determined that the public interest would be clearly endangered or the personal privacy or guaranteed rights of individuals would be clearly in danger of unwarranted invasion.
To implement this policy, the General Assembly declares:
(1) It is the intent of this Act to protect the citizen’s right to know;

Mr. Clark, or anyone else for that matter, can you please tell the public how you intend to ensure our RIGHT to be INFORMED by refusing to answer our questions?  Questions that specifically pertain to the CONDUCT of your business, AS OUTLINED IN THE STATUTE!  You see, what I referenced above IS from the state statute and is not a representation or interpretation from a handbook written by a bunch of attorney’s!

Why on earth would an attorney try to imply to his client that a page from a Township Handbook is something they should use in County Government? Well because the statute doesn’t say what they want!

It’s kind of like that attitude of our County Board Chairman with his comment that they agree the law does NOT say they can do what they are doing and then claim that the law doesn’t say they can’t as a way to justify their continuation of the practice they clearly acknowledged was not in the statute.

Sorry folks, the law don’t work that way.  Maybe they should read our States Constitution that outlines they only have the powers granted by law. If the law is silent, the power does not exist.

The law is not silent on our right to be informed and know the conduct of their business.  Staying silent and refusing to respond, either in a public meeting or after the fact is in no way a representation of the intent of the law.

If this is the advice their attorney, Craig Smith is giving then rest assured the  keeping of information from the public through stall tactics and silence is not going to work as I am not going away nor am I going to tire of ensuring our government is a representative of the people, not a private agenda of power and control by a select few.

Get ready folks as word has it they plan on using this same tactic for your County Government.  Isn’t it interesting we have elected and appointed officials that think it’s OK to basically ignore the public?  That may be an avenue they pursue but rest assured, we are still a Republic and the voters will speak!  Fortunately for this county, 4 County Board members have had enough and are NOT running again which is a blessing!

Would ANYONE that has three strikes of legal advice from your attorney keep that attorney?

(This document IS NOT from the Statute pertaining to the peoples right to speak!) 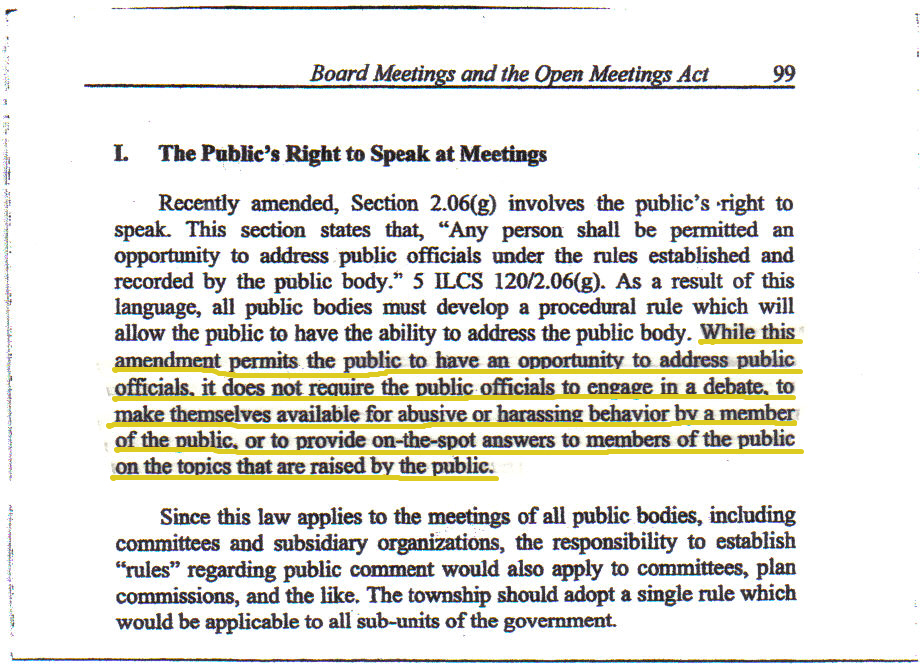